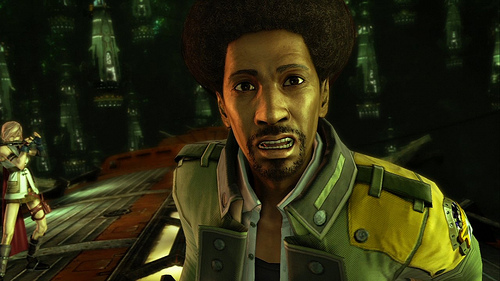 When we’re first introduced to Sazh Katzroy in Final Fantasy XIII, he seems like a bumbling fool, especially in comparison to the game’s heroine, Lightning. When a giant robot comes to destroy their train, Lightning immediately grabs her Swiss Army gunblade, puts her game face on, and engages the robot in melee combat. Meanwhile, Sazh is trying to stay as far away from the flying metallic death machine as he possibly can. In fact, Sazh yells to Lightning “Run! I meant away!”

Later, when the giant robot destroys the train, Lightning slides and flips off of the falling train gracefully landing on her feet, ready fight with time to pose. Sazh on the other hand, runs for his life and when he jumps, he lands on his ass. But more than that, when he gets up, he’s tired and winded. Apparently, jumping off of a collapsing train while a giant robot tries to kill him takes a lot out of Sazh.

While Sazh actions and mannerisms seem to be played for comic relief, they reveal something familiar juxtaposed against Lightning’s coolness. Sazh is afraid of flying death machines, he gets tired, never lands on his feet, and when Lightning leaps off of a platform, Sazh follows in the most practical way, by climbing down. Indeed, Sazh seems to be acting like a normal human being. 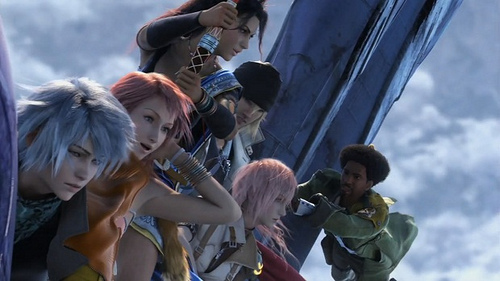 But it’s more than just how he acts compared to Lightning. Sazh’s character design is fairly practical. He wears a jacket displaying a pilot’s patch over a buttoned shirt with khakis and boots. He doesn’t have a scarf shoved down his pants, he doesn’t wear a scarf-cape, and he’s the only one with enough sense to bring a gun to a gunfight.

Also Sazh’s motivation and outlook work towards humanizing him. Sazh is a widower and single father who would do anything for his son, Dajh. He’s been handed more bad deals in life than any other character in the game, and he usually manages to stay positive, though there was one instance where he almost killed a child.

While traveling with Vanille, Sazh is briefly reunited with his son. As it turns out, Dajh’s focus was to find his father, and when he did, he became crystallized.

Following Dajh’s crystallization, Sazh comes to learn that Vanille was responsible for Dajh becoming a Cocoon l’Cie, and Sazh becomes enraged. So much so, that he points his gun at the child and seriously considers squeezing the trigger. He doesn’t though, saying, “Lot of things can be excused. Shooting kids ain’t one.”

It’s at this point where Sazh’s humanity really shines through. He’s lost his son, and killing the person responsible, child herself, won’t bring back Dajh. His positivity runs dry, and Sazh is tired of running. He wants out. So he puts his gun to his head, and pulls the trigger. 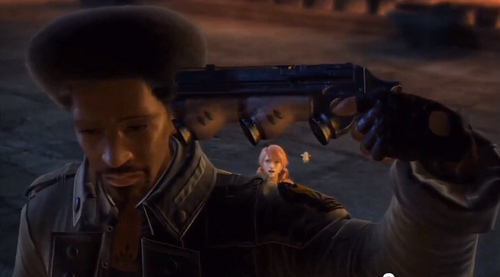 Sorry Sazh, the game is not done with you yet

This reaction to grief is both realistic and reasonable. Though he’s dealt with tragedy before, the loss of his son is too much, even for Sazh, proving that he’s not infallible. However, Sazh didn’t kill himself. After all, this is a Final Fantasy game, and there is still a government to overthrow.

Following this turn of events, Sazh largely takes a back seat to the rest of the cast, only interjecting here and there whenever someone says something completely ridiculous, like “let’s topple the government.”

In the end, at first glance, it’s easy to dismiss Sazh as just another Japanese created African-American stereotype. But, looking past the chocobo in his hair, Sazh emerges as one of the best characters Square-Enix has ever created. His actions are rational, and not dictated by a need to appear cool. His look is practical and functional without being inundated with buckles and straps. His motivation is grounded by fatherhood, and after each hit, he keeps on moving.

Sazh is just a guy that somehow got stuck in a Final Fantasy game.