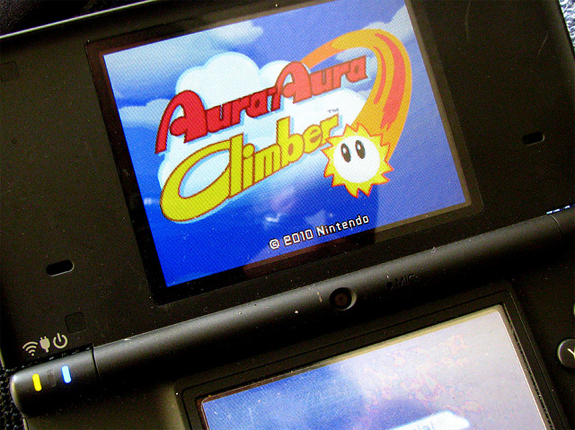 Nintendo’s downloadable game services get a lot of crap because they don’t advertise the games enough.  There are probably a ton of hidden gems on WiiWare, DSiWare, and the eShop.  Aura Aura Climber from NST for the DS is one of those.

I only found out about this game because when I decided to transfer all my digital content from my DSi to my 3DS I had to 200 Nintendo points left over.  For $2 it’s like all those addictive iPhone games we keep buying on a whim – simple, challenging, and fun, but I honestly question if Aura-Aura would be possible without buttons.

I guess you could describe Aura Aura as a sort of puzzle platformer.  The closest thing I can think if is maybe Bionic Commando but with no ground and a lot more obstacles to dodge.  You are this little “sun” thing that jumps through grappling points in the air and through all kinds of obstacles and powerups. 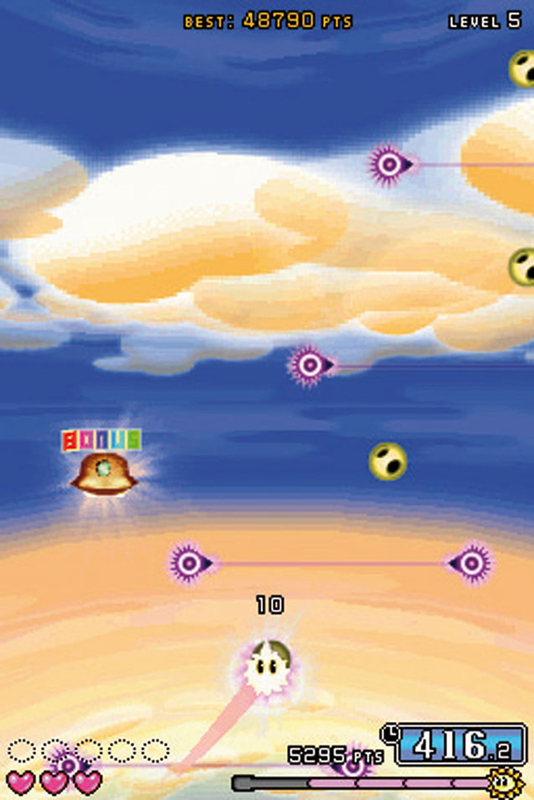 That element itself feels pretty cool (I think grappling hooks are an underutilized thing in action games), but what makes the game really take off is how quickly the difficulty and complexity ramp up.  I’m only at level 7 and I’m already stuck at patrolling enemies, instant-kill lasers, Donkey Kong Country-style cannons, sequence puzzles, and a lot of other crap.

What makes it stick is the collectables and the score system based on points and time, which turns the whole thing into a risk/reward scenario.  Oh you could definitely just hop past this laser field towards that cannong and get on through the level easy, OR you could jump back down through that mine field and level up your hook. Aura Aura is as hard as you make it, and does a good job of tempting you to seek out the challenge.  Online leaderboards would probably enhance the game a lot.

Hopefully Nintendo can learn how to properly promote their downloadable library, and I think eShop shows that they’re starting to.  Hopefully that translates into a competent storefront on the Wii-U.