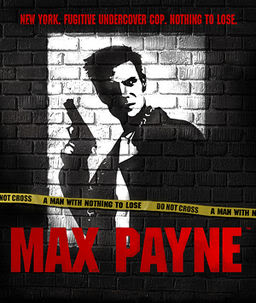 The success of LA Noire along with the critical achievement of Heavy Rain has brought the emerging of a new style of gaming that attempts to bring the elements of film-noir to electronic entertainment.

By taking the darkest and grittiest tone of the genre than blending the auteurism of John Woo, Rockstar presented one of the best works of neo-noir since Reservoir Dogs. With the release of Max Payne 3 a few moths away, I would like to go back and examine how this game redefined a classic genre by adopting it with a new media.

Gamers are introduced to Max Payne as he looks down on the edge of a skyscraper as he reflects back upon the events of the last three days. A devoted cop whose world was rocked when a group of junkies murder his family, Payne has been working undercover trying to bring down the Punchinello Mafia, who are the largest distributor of a new designer drug called Valkyr.

Set in January of 2001 during one of the largest blizzards, Payne’s odyssey begins when he is asked to meet with DEA Agent Alex Balder at a subway station. Upon his arrival, Payne stubbles onto an attempted bank robbery by mobsters working for Jack Lupino. After foiling the attempted robbery, he is able to find Agent Balder only to see him gun down by a mysterious assassin.

Payne flees to a mobster hideout only to learn his cover has been blown. To make matters worse, he has becomes the prime suspect in Agent Balder’s murder. Now with nothing to lose; Payne embarks on a vendetta across New York in an attempt to bring down the Punchinello Mafia and prove his innocence.

Upon its release, Max Payne was highly praised by gamers and critics as it won multiple awards including a BAFTA award. Its success was followed by Max Payne 2: The Fall of Max Payne in 2003 along with a feature film released in 2008 and an upcoming third game set to be released in mid 2012.

So what made Max Payne standout from other action games? To be fair; calling it an “action game” would be like calling The Dark Knight a “superhero movie.” It may have the appearance of its expected style but it is layered with a deep metaphysics regarding the protagonists that it gives the audience a rich experience.

Max Payne can be best described as a film-noir directed by John Woo. It has that dark and gritty tone that has been affiliated with the film-noir genre. Max Payne (as a character) is the archetype protagonist commonly featured in works of noir. Payne has been tossed into the fatalist situation and with the deaths of his family; his character has lost any meaning to live. The game is rich with symbolism that reflects the noir tone, be it Payne’s dialogue or the metaphors encountered.

While the game has the noir tone, the action is driven by elements that have become synonyms with the works of John Woo. The most obvious thing to note is Max Payne use of a M92F Beretta which is often dual wielded (a trademark of Woo). But it’s the introduction of Bullet Timing into the game play mechanism that allows players to progress by engaging in gun fights that reminiscent of the highly choreographed action sequences featured in Woo films.

It has been almost eight years since the last time Max Payne waged a one-man war against organized crime, so what expectations dose Max Payne 3 have to live up too? Unfortunately it’s not just the game play that Rockstar needs to be concerned about but also continuing the film-noir element that has made the series an icon.

Max Payne is more than just another third person shooter but an example that a strong literary content could enrich the artistic merit of a game. With strong competition in the action genre, it’s going to be the film-noir aspect that will earn Max Payne 3 the same success bestowed upon the first two games.