There have been many games in the past few years attempting to recapture the rich Lord of the Rings universe, but none have been very successful. Many fans of the wonderful Tolkien series have been at a loss lately, desperate to jump back into the incredible world of Middle Earth. To any of those who own a copy of Medieval 2 Total War, you’re in luck.

It’s taken a devoted team of modders to do what the triple A publishers could not, successfully create a Lord of the Rings game worth playing. They’ve created a fantastic modification of Medieval 2, completely converting the game to bring you into the world of Middle-earth. 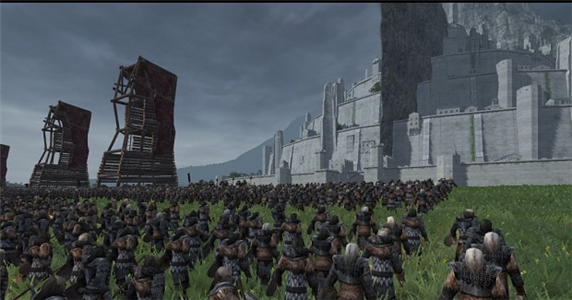 The mod went in production in March 2008, version 3.0 pushed out just last year. Everything you’ve loved about the classic Total War game is here, just in Middle Earth fashion. The epic and strategically demanding battles are all there, backed up by an extensive playable campaign map of Middle Earth that features all of your favorite locations from the books and movies.

Each and every battle map is specially customized to fit that region, including settlements. For example, Minas Tirith looked very similar to how it appeared in the movies. Not every settlement is customized, but the majority of the most popular ones are.

Even though the game is just a mod of another, I’ve never seen any other game capture the many, enormous battles that took place during the war of the ring better than this mod can. Thanks to Creative Assembly’s framework for the game Medieval 2, thousands of wars clashing against each other over the fate of Middle Earth was made possible.

The mod captures the Tolkien universe with foolproof accuracy. Each of the nations in Medieval 2 have been replaced with the four well known races of Middle Earth (Elf, Man, Hobbit, and Orc) and each major event or iconic location occurs or is placed as it should be. Nothing appears of “feels” out of sync.

It was clear however, that model and settlement texture drew inspiration from the movie trilogy, though the recreations are dead on. Every unit derived from places such as Lorien, Gondor, Rohan, or even Mordor looks exactly as they should. The modders only ran into problems when creating the appearance of the units in the lesser known factions. When compared to the splendorous quality of the rest of the game, I got the sense that these units were a very bland. But playing as these unknown factions are unquestionably fun because you get to explore across unfamiliar regions of Middle Earth not touched in the books or movies in much depth.

Out of all of the new features put into the mod, I thought the unique unit recruitment process was the cleverest. Unit recruitment is based on a cultural regional level that requires strategically decisions to be made and will slow down your expansion if not properly planned. For instance, if you play as an elven race, recruitment will be significantly slower than that of the race of men. The elves are a dying race in Middle Earth and they’re represented rightfully so in the game.

Another neat addition was the fact that the AI will receive certain bonuses like extra money or additional armies if they get in serious trouble to compensate the lack of human intelligence and the lack of income through missions. While this could be very frustrating at times, I figured it was a fair trade off. I enjoyed the additional challenge.

The level of devotion put forth into this mod is incredible. The fact that the mod was made entirely from a group of people volunteering their free time to make it all happen is incredible! The enthusiasm put into the game definitely shows; it is a mod by Tolkien fans for Tolkien fans. I’ll never forget the adrenaline rush I got as a group of trolls smashed through my lines, forcing me to alter my entire strategy right there on the fly.