A lot can be said when it comes to games that allow players a significant level of control. The ability to shape and change a narrative is the primary strength that video games have going for them over other media, and it’s a strength that many developers have rightly sought to capitalize on. As a generation, we’ve been weaned on open-world games and experiences that allow us to create our own stories within the constructs of virtual worlds.

As engaging as those worlds might be, though, there’s still value in a tightly woven title that removes player freedom for the sake of an extremely focused experience. That’s precisely why Capcom’s Asura’s Wrath, a game that almost completely rips away the aforementioned freedom from the player’s hands, is such a refreshing palette cleanser.

No choices are made in Asura’s Wrath. As the single-minded titular deity, you’re driven by an unholy rage that forces you to collide headfirst with any god or demon that stands between you and your revenge. There is no exploration — and no turning back. Asura’s focus is such that you’re always propelled directly toward your goal figuratively, and in many cases literally as well.

When you encounter enemies in one of the game’s many simplistic brawler segments, your only choice is which enemy to kill first. Similarly, the game’s shooting sequences, which take a page from Panzer Dragoon, offer very little in the way of steering outside of the tunnel that contains the action. With either flavor of action, the ultimate goal is to cause enough destruction to fill up Asura’s rage bar to a point where he can activate Burst. This ends the fight and begins a quick-time-laden cut-scene that drives the action forward, and it’s within these cut-scenes that you’ll spend the majority of your time “playing” Asura’s Wrath. 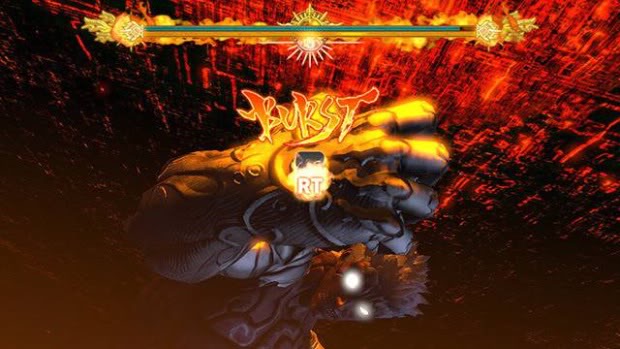 It sounds completely farcical for a game to largely play itself, only requiring rapid or precise inputs at key moments, but the payoff is actually worth the lack of true control. By removing that control and choice, the developers of Asura’s Wrath are able to tightly focus the action and serve it up on a spear’s tip. Everything about the action sequences, from the camera angles to the sheer ridiculousness of each massive strike, is scripted for maximum visual appeal. You’re not likely to miss something cool because of a camera mishap or simply not being in the right place at the right time. Every player will be able to experience Asura’s Wrath in largely the same way. You’re either going to go on the journey that the developers intended, or you’re not going to play at all.

If you choose to play, you won’t miss a single thing. It’s a little tyrannical, and even oppressive, but given the fact that the plot revolves around the whims of gods and the inability for regular mortals to make a difference, it fits.

Plus, there’s something strangely satisfying about pressing down on both analog sticks to plant Asura’s feet, then throwing them out to the sides to spread his arms in a “come at me bro” posture as the finger of a planet-sized boss descends to crush him. Big moments like these just wouldn’t be as epic without carefully planned camera movements and animations. And when the time comes to hammer on the attack button to punch the living crap out of that massive digit, the amount of effort required to complete the sequence leaves a satisfying arm ache that actually helps connect a player with the action.

It’s a style of gameplay that definitely won’t appeal to everyone. Some people play for the challenge while others play for the experience. Even among the latter, the niche audience that might be interested in a quick-time-driven brawler/shooter loosely inspired by techno-infused Hindu mythology is likely to be very small. That said, if you’re burned out on games that include fast travel or are sick of dialogue wheels and alignment points, consider tagging along on Asura’s headlong rush. It’ll definitely knock the taste of empty open fields out of your mouth with one of the fiercest uppercuts you’re likely to see in a game this year.