It's a personal embarrassment to me whenever TV commercials or movies depict kids playing video games. It directly drove my parents to crusade against the "brain mushing" effects of gaming when I was a child, and it flat-out annoys me as an adult when I’m around my in-laws. This is because mainstream media always portrays someone playing video games in one of two ways: the brain-dead zombie or the button-mashing seizure victim, and both are equally unrealistic.

Admittedly, it is strange. I've filmed my friends in college while they played multiplayer Halo 3 and it's surreal watching the subdued life signs and the soundless staring broken by eruptions of laughter and squealing when killed or killing. So TV has got it half right, since the player's body is both ecstatic and hushed intermittently, but there's so much more to it.

Shows like The Big Bang Theory strive for accuracy in their nerdiness. The terminology is right, the culture is authentic, but it only makes the little cheats like "heads exploding" (no heads explode in Halo) all the more obvious. That's the business of TV and movies, and I can't overstate this: a person playing video games is not visually interesting. But neither are the human bodies watching TV, the ones seeing the dishonest and glitzier portrayals of gaming. I remember complaining to a friend about the orchestrated nature of "reality" TV only to be shot down by, "well, it makes for better television." 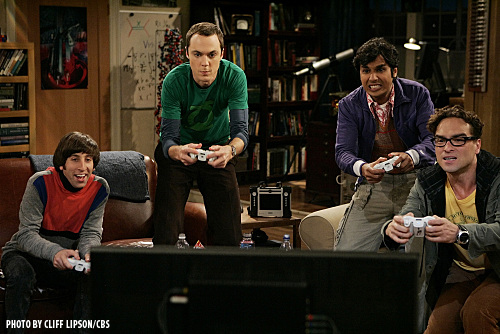 Here's the problem: video games are powerful activities, but TV and movies only give us half the picture. Our bodies are just the vestigial evidence of the medium. To give fans and non-gamers alike an honest portrayal, directors need to turn the camera around and let us see what the player sees. It's like reading the script for Michael Bay's latest movie and wondering why they make so much money. In the end, television and movies are focusing on the least important aspect of gaming and that may be the only information some people have to judge the medium by.

Next time Sheldon, Raj, Howard, and Leonard are playing video games, let us see the game in action, give us some context, cut between the human actions and the virtual consequences, and lose the stereotypes. I think it's time we get the full picture.

So, what's the worst depiction of gaming you’ve seen in a movie or on television?