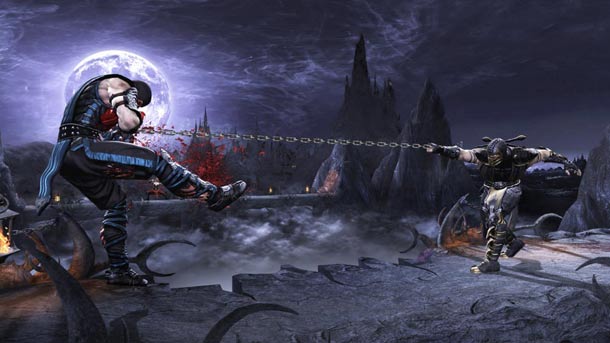 Mortal Kombat, a series known for its gorey finishes, unique fighters, and of course controversy. The one thing this series has not had since its introduction is a title that has stood high among fighting genre giants such as Street Fighter, Soul Caliber, Tekken and many others. This is the game that puts an end to that. What this game has that the others before have failed to do was add style, fast paced combo's and action to an other wise more slow paced fighting series.

Mortal Kombat drifts away from the 3D fighting ways of MK vs. DC and its other new gen. predecessors and goes back to a more 2D style of fighting like the older games of the series, and the transition couldn't have felt better for the series. Mortal Kombat is overflowing with content and when you start it up and see these features you will feel overwhelmed with how much they were able to stuff into a fighting game.

The story mode is one of the better ones I have seen in a fighter. The story mode will take you through almost every fighter in Mortal Kombats 26 fighter roster. Story mode takes you through the orgins of the many characters and shows you how many of them came to be. One thing I was very impressed with was the almost seamless transition from cut scene to fighting without any loading screens to be seen.
Another great feature and perhaps the biggest and most time consuming is the addition of the huge 300 level challenge tower. Here you will do various fights all of which have unique challenges inside that you must complete in order to move on, or of course skip it with koins, the currency in the game. Here you will also do mini games such as a "which cup is it in" type of game, and a very unique roulette fighting game.
As I mentioned earlier you will be collecting koins in almost anything you do. Story mode, challenge tower, anything. These koins can be spent at the Krypt, which you may remember from previous titles. In the krypt there isn't a shortage of things to buy. From in game music, artwork, fatalities, and alternate costumes the Krypt is definitely  a very welcome part of this content packed game.
The game also of course features multiplayer which is very fun and addictive especially with the added addition to king of the hill mode which will allow up to 7 people to alternate between the king depending on who wins. This mode also offers a rating system so spectators may rate you on your performance. Although many of the matches I played were filled with lag and many of the same characters, it is still a top notch multiplayer experience that any fighting fan will enjoy.
Although being hard to come by I do have my gripes with the game. The bosses in this game are very cheap and don't expect a fair fight even on the easier levels of difficulty. Also as I said before you may run across quite a bit of lag online even with a good connection.
All in all this game is a must buy for any fighting fan, even if your not to familiar with Mortal Kombat as a series you will enjoy this game if you appreciate good fighters. This is my fighting game of the year. Mortal Kombats reboot succeeds in a big way.