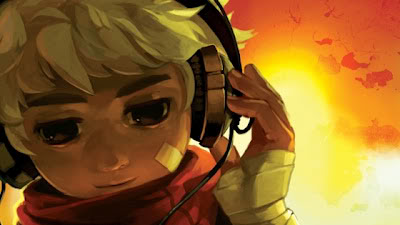 I'm a gamer who likes thoughtful mechanics and intuitive control schemes over story. When I think of a game, any game, it's the level design and how well it wraps around your characters' abilities that comes to mind, not whatever background narrative was written to facilitate those mechanics.

The Legend of Zelda is about agile movement and resourcefulness; Gears of War is about feeling out the encounters and forming a plan of action on the fly with whatever guns and ammo you bring and that happens to be lying on the ground; fighting games are about outwitting your enemy and meeting at least one of a number of win conditions (deplete your enemy's life bar, have a life lead when time runs out, knocking your foe out of play, etc.).

I primarily look at games as exactly that: games. A title that plays poorly but tells an amazing story has failed as a game, no matter how much anyone may press on for the narrative payoff.

And it's those mechanics — the level design, control scheme, and discovering what combination of things will soar over the hurdles designers have set in front of you — that define games as an art form.

Unfortunately, I feel this is lost not only on gaming's opponents, but on many a gamer proper. I read, listen to, and see many opinions on the artistic merit of games focusing solely on storytelling and not on any particular control scheme.

Take Bastion, an amazing game everyone should play. Applauded for its compelling narration, it receives very little praise for its wildly entertaining and customizable combat system. You get a wide variety of very unique weapons, each customizable with a number of distinct effects. Every time you level up, you get to add a spirit to the distillery rack, which imparts an interesting passive bonus; you must weigh these bonuses against each other, as you can't get them all. Even difficulty adjustment is fresh and intuitive, letting you turn on or off idols that grant enemies various interesting benefits. There are tons of viable builds; agile builds focus on quick hits that deal damage over time while slowly replenishing your life, power builds cover the screen with as many hazards as possible, sniper builds enable you to keep your distance, and hybrid builds offer everything in between.

Responsive controls and tight movement combine with everything else to make Bastion one of the most mechanically sound games I've ever played (yes, ever, and I played Berserk in arcades)…yet it receives most of its accolades for its admittedly wonderful story, music, and characters. Bastion is art, and its narrative is no doubt both compelling and one of the reasons why, but it isn't the main or biggest reason. That Bastion is a masterfully crafted game, with thoughtful and well tuned gameplay and mechanics, is what makes it great and the defining reason it's a spectacular work of art.

There are mediums for telling non-interactive stories. Film, television, novels, and comics are better platforms for the creative soul looking to tell a story first. Video games have different priorities; a game doesn't even really require a story (e.g., Geometry Wars, amongst countless others). Gaming stories must be unobtrusive; at best, the story compliments gameplay. And hey, games have told some damn good stories over the years; this can't be denied. But games are, by their very nature, games: obstacles and objective goals governed by rules.

There's as much artistic merit in the way Mario or Sonic gains height after stomping an enemy as there is in The Shawshank Redemption's message of newly freed inmates thrown into a society they barely recognize. Artistic expression abounds in both Master Chief's usage of the Spartan Laser and Atticus Finch's resolve to defend the innocent regardless of skin color. There's as much an experience to be had in watching a good Star Wars film as playing a good Star Wars game.

Video games are expressive, unique works of art. Please ensure you recognize precisely why, though.