I am about to tell all of Bitmob my dirty little secret. I love Call of Duty.

This past November Call of Duty: Modern Warfare 3 was on my radar but a mixture of my guilt and a game called Skyrim I never got around to buying it. All was well, until recently when Bitmob asked us to write about our backlog, and at the same time Modern Warfare 3 just happened of appear on sale on Xbox Live. It felt like fate had shown it's hand.

Say what you want about the Call of Duty franchise, the reason why this game sells so well is because it is fun as hell.

Let me start of by saying that I was disappointed with Modern Warfare 2. It's terrible story and extremely short campaign left me wanting more. I also found out during that iteration of the franchise that I was terrible at multiplayer. I could never get a kill streak going, and the players got on my nerves. The Spec-Ops portion also felt short and not very difficult. So I told myself I was done with Call of Duty, $60 wasn't worth a 5 hour campaign.

Then came November 2011. I have a strict budget of one new video game a month, so I had to choose between Skyrim and MW3, of course Skyrim won. This only delayed the inevitable, however, because six months later I bought MW3, and to put it plainly I'm glad I did. It may be more of the same, but if the same is still fun, is it such a bad thing?

Sure the story is filled with holes and there are too many characters, and some levels feel like they were added only to make the campaign longer. The graphics are dated, it looks almost identical to MW2, just a little shinier. Where this game lacks in story and graphics it makes up in mechanics, this is by far the smoothest shooter on the market. Over the course of the series Infinity Ward has tweaked and perfected the game play.

The campaign took me about 5 hours to complete on the regular difficulty and around 8 hours on the veteran difficulty. This time however, the short play time did not bother me as much, the rollercoaster ride that is MW3 and it's amazing action sequences and set pieces were plain fun. Also, the Spec-Ops portion of the game is more robust this time around. It offers the same specific co-op missions as in MW2, however this time Infinity Ward has has added survival mode, which is CoD's form of horde mode.

Survival mode is huge, it has endless waves of enemies with several different tiers of difficulty. During these matches you can purchase different weapons and equipment to help you survive longer. Also, you can gain experience points just like in the multiplayer portion, as well as being able to unlock new weapons. What makes the Spec-Ops portion of the game so great this time around is that it allows me to enjoy the Call of Duty experience without all of the annoying players that this franchise seems to attract in multiplayer. 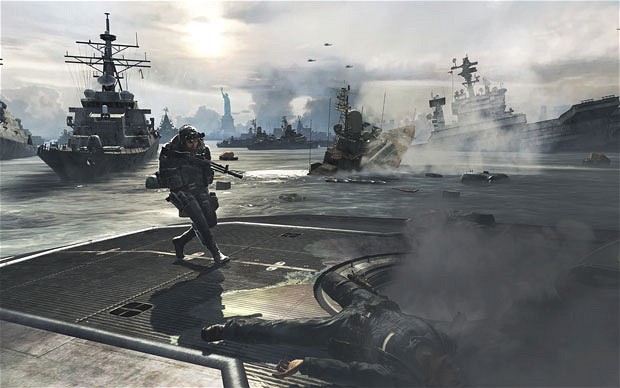 I had a lot of fun playing the third installment of the Modern Warfare series. While I will leave the multiplayer mostly untouched, the fun campaign, and a time intensive spec-Ops section left me satisfied with my purchase.

After MW2 I began to feel guilty about enjoying such a testosterone filled video game. I felt like it was giving video games a bad image. Sometimes in these situations we tend to forget that video games are meant to be enjoyed, and sometimes a guy just wants to blow up tanks.