Between the time when Roger Ebert initially claimed that video games could not be art and now, something happened. I’ll begin this essay by briefly retracing the trajectory of “video games as art” as I see it. Once upon a time, only a fringe group of sophisticates in the video game community were interested in this question. They wanted to do something more with the medium than just produce another Pac-Man, Zelda, or Doom. As a medium, like cinema, print, or any other, these people believed that video games could be created that were indeed “art.”

However, during those years, most who video game fans didn’t share this aspiration. They were purely games. They were fun like Super Mario Bros. and edgy like Mortal Kombat. As the sub-cultural sanctuary of an entire generation, the last thing these players wanted was for their raison d'être to be co-opted by the establishmentarian elites; the very people they had gone into the arcades and basements to avoid. The last place anyone wanted to see Grand Theft Auto was in a museum.

Then came games like Shadow of the Colossus and articles like Ebert’s, and things began to change. The median age of the “hardcore gamer” changed, the sub-culture grew older, and all of a sudden the possibility of more complex, nuanced, and mature video games had a new appeal. And so like the great Scottish unwashed who rallied to Mel Gibson’s side in Braveheart, a center formed in the gaming community wherein players began working to establish video games as a potentially artful medium. The dream once held only by a marginal group of older designers and PC gamers became a mainstream ideal.

At some point after that, the matter was considered closed. The discussion was over. Everyone was tired for some reason. But, like our 43rd President standing aboard the U.S.S Abraham Lincoln, victory was premature.

It’s as if, after several good-faith attempts to explain why titles such as Shadow of the Colossus or Braid might be art, we had somehow proven much more than that. Instead of just a few select video games being art we had decided that all of them were! I don’t mean to overstate the agreement on that front, but discounting those who still feel that all video games are just games and those who simply don’t care either way, a significant chunk of those who remain do seem to feel that Halo 3 is as much a work of art as Crime and Punishment or On the Waterfront. Ebert is wrong—in part. But so are a lot of other people.

Some video games are smart. Some video games are fun. A few are both, but many are neither. Simply put: it’s important to clarify a few things before the gaming community embarrasses itself any further. I, like many other gamers, am getting older. I’m changing and growing, and I want what I’m most passionate about to change and grow with me. There are several things stopping this from happening, but the one I want to point out here is the intellectual laziness with which many of us have approached the subject of whether video games are, or can be, valuable works of art. 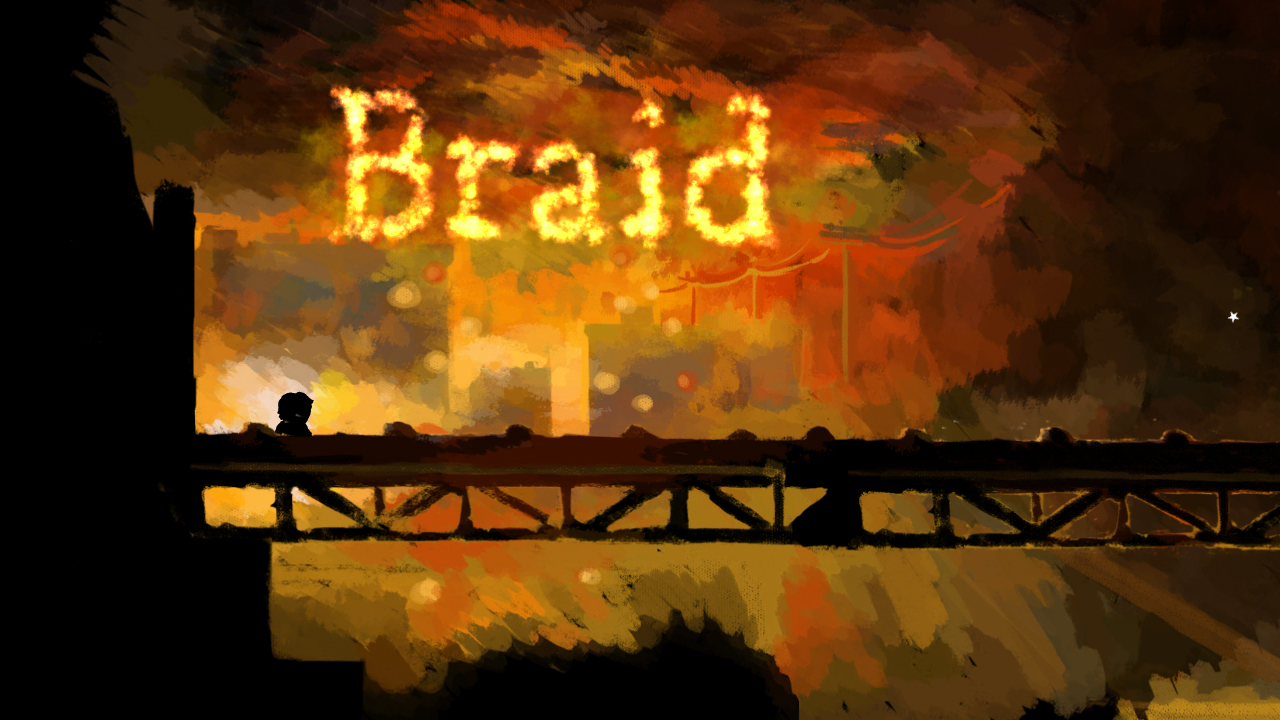 I was surprised by the backlash against this profile of (Braid creator) Jonathan Blow. I’ll concede (for now) that it was pretentious, elitist, and a bit narrow-minded…but it was also right.

Most video games are dumb. I thought that was pretty self-evident, but perhaps not.

What does that have to do with art, though? I like Call of Duty, Mass Effect, and Super Mario Galaxy a lot. I spend most of my time with “silly” media: stuff that entertains and is fun, but has little else to offer. Sometimes, though, it’s nice to be challenged, provoked, or elevated.

Art does this. It engages us through an energetic aesthetic that excites our senses and imagination, but with a purpose. A landscape might be beautiful, but it’s the painter who paints it, the photographer who photographs it, or the writer who writes about it that has an opportunity to use that beauty in order to make a point.

Shakespeare takes a stinging critique of humanity and combines it with clever rhymes and beautiful metaphors. That’s why we call him The Bard and still force his work upon ungrateful freshmen. His plays would still be fun without the philosophy, but they wouldn’t be art.

I admit that I’m employing the term “art” in an unusual way. We tend to think of it loosely as anything that’s pretty and/or meaningful. Hence the Mona Lisa is art, as well as Transformers: Beast Wars.

However, a definition that can include both of those things seems deeply flawed. To put a Renaissance masterpiece in the same category as a ‘90s cartoon that saw the Transformers reincarnated as animals tells us nothing about either one. This isn’t a value judgment. It’s not a judgment about meaning, either. Beast Wars is more meaningful to me than the Mona Lisa ever will be. Instead, what matters is the difference between art as a whole, and the distinction between good and bad art.

For that to happen though, the lines must be drawn clearly and resolutely. The most helpful distinctions might be between entertainment and art. Skillfully employing aesthetic elements in order to excite or bring pleasure to an audience is a great thing. It’s what the blockbuster is predicated on. But that is an entirely different project from trying to skillfully employ aesthetic elements to make a point, or raise a question, or critically investigate something about ourselves or the world around us. You can do both. A lot of the best art does. However, they essentially remain two different goals.

All video games strive to be entertaining and earn their cost of admission. And a lot of them, especially in recent history, have been (compare the median score handed out today with the median from the last console generation). Unfortunately, very few strive to be art as I have defined it above, and even fewer of them succeed in being good art (we could argue about who makes the list, but it’s undeniable that the list is small and only a handful of titles are even in the running). 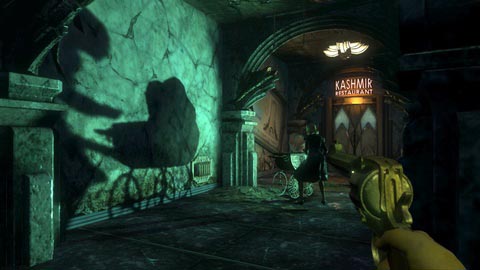 It’s no coincidence that many of the video games that have gotten the closest to being actual good art reek of auteurism. An auteur means more control, more control means clearer message, and clearer message means better art. Hideo Kojima and Ken Levine have been doing this in the AAA space (with Metal Gear Solid and Bioshock, respectively), but indie developers like Blow have perhaps had more success because the smaller budgets allow even more control. Levine’s next game has to sell, whether it tries to be art or not. Blow’s does not.

This isn’t any different from the movies wherein blockbusters and art-house films can co-exist. The difference, however, is that we are nearly guaranteed movies like Tree of Life and Drive every year. Artistic video games are produced much less consistently. There are certainly business models at work that partly explain why Hollywood can support as many unmarketable movies as it does (like Melancholia), but at least some of it has to do with a cultural demand not seen in video games.

What’s more amazing than how much money was wasted on making Green Lantern is how much money is still spent on the slew of Oscar nominees that most people haven’t even heard of before they’re showcased at the annual awards ceremony. In theory, Green Lantern should have paid off. That’s why it was made. But few, if any, of last year’s nominees for Best Picture were made with the expectation that they would be a financial hit.

They were made because their creators wanted them to be made, and because as a society we expect a certain amount of them to be made. The same thing is starting to happen in video games. Developers, writers, and artists are collaborating on projects they want to produce because they have something they want to share or communicate in ways that only video games can, and video game players are becoming more open to these untraditional experiences. Journey is a prime example. It’s compelling and substantive, and makes an argument about life and friendship and loneliness.

Even if I don’t agree with that argument, it’s wonderful that I can interact with and reflect on certain issues through a videogame. If only more of them afforded players a similar opportunity.

Former Editor-in-Chief of IGN, Hilary Goldstein (whose work I admire and respect), made some boneheaded arguments about this very subject in a recent column. It went something like: “Art is bullshit and video games are better and anyway who even cares?”

I don’t see why this line of thought would be convincing to someone who loves novels or film, and I don’t see why it should be convincing to someone who loves video games either. Plenty of art is bullshit. Plenty of video games are also bullshit. What we should take away from that is that lots of art in general could be better. And, in the same way I want novels that I can grapple with and discuss, I want video games that stay with me long after I’ve played them; not just because they were imaginative or fun, but because they explored an important subject in a way that other media hasn’t.

The only way for more video games like that to be created is to start expecting more as a community. Just assuming that all video games are automatically art, or sticking our heads in the sand and mumbling “who cares?” isn’t going to help the medium grow, mature, and become more diverse.