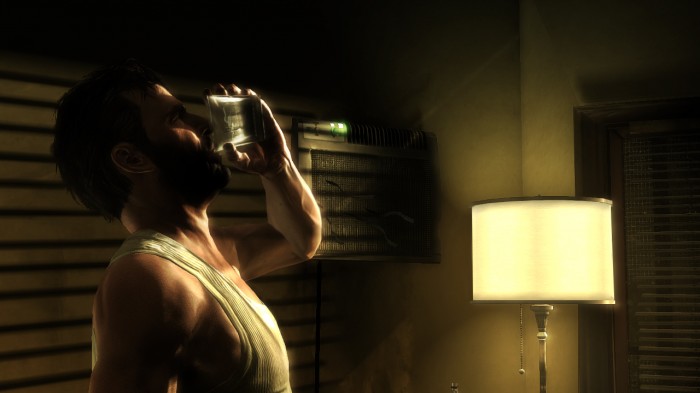 We see Max Payne getting settled in a new apartment, telling himself it’s time to move on with his life. His voice holds a tone of hope. Seconds later, he opens a bottle of Scotch and hope begins to disappear. He stares at a family photo and starts to reminisce. Rage and depression begin to mix into one cocktail for Max, and it does not look pretty.

If you have played Max Payne 3, then you know that this isn't just any cutscene. It’s the first thing you see after popping the disc into your console. The developers at Rockstar found a way to reel you into the narrative before you even reach a menu.

I was excited to see what Rockstar Games would do with the presentation in Max Payne 3. With the first two games being developed by Remedy (who have moved onto the Alan Wake series), I was worried that Rockstar might change things too much. I wanted to be reunited with the comic-book format and Max's dark metaphors. Rockstar may have removed the former for the most part, but they replaced it with something so much better: the art of the cutscene.

There are no loading screens in this game (they all happen during the cutscenes), which works great on two fronts. First, you are never taken out of the narrative. The storyline freely flows almost as if Max is in your living room telling you his tale. Secondly, it gives the player anticipation. With this style of presentation, you never know what opening a door will give you — another cutscene, a firefight, or both. Even during gameplay you are reminded that you are experiencing a story. Max will comment on his surroundings or give one of his long-winded metaphors. This device helps keep the players focused on the story.

Not only has Rockstar crafted a rich narrative, but Max’s character development is also astonishing. This time around, while still dark and brooding, he isn't quite as emo as he was before. He has hit rock bottom. His life is a complete mess. It’s apparent that there are two voices in his head: one that tells him to shape up and move on, and another that makes him drink another glass of scotch. The inner conflict within Max Payne himself is the real story.

In Max's inner monologue he mocks the people he works for, yet he seems to do whatever it takes to protect them. At first, he defends his motives as capitalism ("you get what you pay for"), but later on in the story his devotion seems to be more of a personal quest to prove to himself that he is not a screw up.

This duality is what makes the narrative so compelling. After your first firefight, Max is worried about all the dead bodies laying around, as if these deaths are foreshadowing more to come. To combat this, he goes home to wash the worries down with some much-needed R&R…in other words, alcohol and painkillers. Reason is telling him that something is wrong, but the destructive streak in him tells him to not notice and just drink. This is the central theme of the game: to see Max fight Max and hopefully become a better man in the process.

We know from Max's previous adventures that all of the violence in his life revolves around him letting a woman die. This time around, Max has a chance to prevent that. Fabiana, the woman Max was supposed to protect, gets kidnapped. To get her back, Max quits drinking and fights off countless waves of enemies. When he finally comes within arms length of the woman he was hired to protect…he fails. In that moment, Max gets to witness a bullet shot into her head. Afterwards, he appears to simply give up. All of the fight leaves him, because he knows that he has failed once again.

This moment enters the small list of stories that have made me truly feel for a character. I also felt defeated. I felt like I had let Max down, like I was the one who let Fabiana die.

Rockstar has done something amazing with Max Payne 3. They’ve proven that ti’s possible to tell a rich and mature story in a game about shooting people. Hopefully other developers will take notice as well.