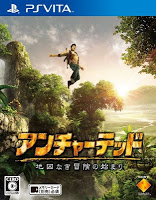 Uncharted: Golden Abyss is a great looking game. The PlayStation Vita really impressed me as it displayed Uncharted: Golden Abyss on it's screen. This game looks like a portable PS3 game. I guarantee anybody who catches a glimpse of you playing Golden Abyss will be impressed. I've always felt like screenshots of portable games never did the graphics to a game justice. That changed when I started taking screenshots of Golden Abyss with my Vita. The picture to the left is an actual screenshot taken on a persons Vita. Beautiful if you ask me. Nathan Drake gets some really pretty places to explore.

There's reason to argue that Uncharted is the best at 3rd person Action Adventure series out there. My favorite part of Golden Abyss was definitely the combat. When it comes to action, Uncharted delivers. You still have a variety of ways to approach how to take down enemies. You can be stealthy, run and gun, melee on people, shoot and cover, throw grenades, shoot rockets, or (sometimes) be a sniper. 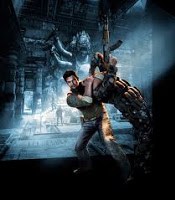 Gunfights are fun as well. Just about every gun from Uncharted 3 is in Golden Abyss, and they work well. I find that being on my fourth Uncharted game, I'm more open to using the variety of guns the game has to offer. When I began Golden Abyss, I felt that the aiming system was a bit off. I felt like the controls didn't react fast enough with my moves. I found that the aim sensitivity settings were set to 50%. I adjusted the sensitivity to 100% and was good to go.

Golden Abyss emphasizes the use of the various functions of the Playstation Vita. You've got to tilt the Vita to maintain your balance at times, use the front touch screen to move stuff, etc. My favorite Vita function was the use of the rear touchpad. The rear touch pad is something I've never done before, and is used for various reasons throughout the game. One reason is to move objects around as you search for clues, and another is a zoom function.

The zoom function is what really impressed me the most about the rear touch pad. It took some getting used to, but once I did it was all good. I liked being able to adjust the zoom on my scope without lifting a finger. The rear touch pad also made it easier to get specific shots with this camera Drake carries with him. The camera icon appears at times for Drake to find a clue. The shots require a certain zoom level which the rear touchpad made easier to adjust. Sure you could use the front touchscreen to adjust your zoom as well, but I preferred the rear.

Golden Abyss added a new element of finding hidden treasure to the Uncharted series. The hidden treasure you find in Golden Abyss come with a back story of the people and place Drake is exploring. I remember finding a lipstick case which came from a woman who had dropped it as she and her husband were being kidnapped. Pretty grim, but it's a lot cooler than finding a ring that I can only rotate and zoom in on.

Game is Too Long

Call me crazy, but Golden Abyss is too damn long. The game has 34 Chapters. I was done with Golden Abyss by the 17th Chapter. At that point you've seen damn near every weapon and Vita function this game has to offer. Things started to get repetitive at this point. The worst parts were getting stuck over a stupid puzzle or something. It was a huge sigh of relief to see the ending credits in this game. It shouldn't be like that, but with Golden Abyss it was. I'm not saying to make future Uncharted games shorter. What I'm saying is it shouldn't feel like a hassle to get to the end of the story.

Later in the game (Chapter 20 something) quick time events becomes a major focus in the game for no reason. Instead of moving the control stick to perform these actions, you are required to use the touchscreen to perform some really mundane quick time actions. It would've been cute if the Vita read my finger movement every time. I found that when there were back to back quick time events, my Vita had a hard time reading my finger movement. It sucked because you'd have to sit through a boring cut scene every time to perform the same quick action. I also found myself constantly missing my quick time cue due to simply not being interested in the cut scene.

WAY Too Much Treasure

I saw a blog post from John Garvin, the creative director of Bend Studios, that said there are hundreds of thousands of treasures and artifacts in Golden Abyss. That's way too damn much. The worst part is the separate stories for hidden treasure that you find. I'd find a lipstick case from a woman who was kidnapped, then I'd find a random piece of a stone that belonged to another set of treasures with a different story. This made it really hard to keep up with the stories behind each individual piece of treasure. I think Uncharted should to stick to the 100 pieces of treasure formula and make stories behind that linked groups of 10 treasures. That would be a lot more manageable and easier to follow.

Being a fan of the Uncharted series, I was excited to play Golden Abyss on launch day for the PS Vita. It didn't disappoint. The gameplay is overall is really good. I would recommend any fan of the Uncharted series to check this one out if you get a chance. It does a good job at showing the promise of the PS Vita by showcasing beautiful graphics and adding interesting new features to the series. If I had to compare Golden Abyss to the other three games in the series, I would say this is probably the weakest addition to the series, but it's still a lot of fun. Golden Abyss is a lot like Uncharted: Drake's Fortune. It's the first game on a new console, and does a good job at showing the promise of future Uncharted titles. Naughty Dog delivered on that promise with Uncharted 2, and I bet Bend Studios will deliver on that promise as well with future Uncharted titles on the PS Vita.