A giant finger stretching miles into the sky, faithfully refered to as "Digit One," was the point where I submitted entirely to the game. I heard the name and was confused for a moment, but when I understood what it meant, I hit myself. Of course it was Digit One; how could it ever have been anything else?

Trudging my way through the epic Xenoblade Chronicles, it's hard to make the argument that this game is immersive in the traditional sense. The graphics are subject to the Wii's hardware, so textures are muddy as hell, faces are straight out of the early PlayStation 2 days, the game likes to stop every half-hour for 10 minutes of cut-scenes, and the characters have about half an hour's worth of combat dialogue for a game which goes upwards of 60 hours (If I hear anyone say "What a bunch of Jokers!" in real life, my fist may uncontrollably drive itself into their face).

What the game has, though, more than anything I've ever had the chance to play, is a sense of place. To briefly summarize, people live on the bodies of two giant gods who died fighting each other. Sounds about right for a JRPG — ridiculously fantastical — and that could be the end of it, but Xenoblade is persistent.

The story does an amazing job of bringing you to accept that this is just the way things are — characters always talk about locations in respect to the body, as do the maps. You begin to ask how could it ever be anything else. But there’s more. 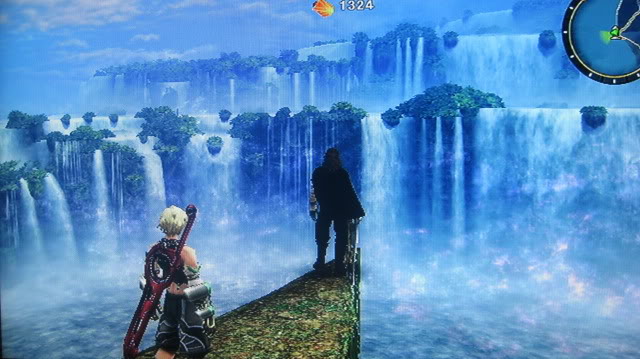 This game is huge. Huge in a way that is often only expressed by schoolboys making snide remarks about each other's mother. There's no invisible walls, and nobody stops you from trying to jump off a cliff; sure you'll die, but nobody stops you from trying. The world begs to be explored by collecting rewards and waypoints. When your little expedition finally comes to the last dead-end, you feel enormously satisfied.

"Oh," you think, "that's all of the arm I've just ran across." It feels both unimaginably huge, as you spelunk and mountaineer across the sweeping landscape, but totally tangible when you put it into perspective. Yes, that was a mighty big forearm, but you've met all the people who live on the elbow, and it's time you made your way up to the head.

It's a simple appeal to the suspension of disbelief: The longer the developer can prevent the player from seeing something that makes them sit up and say "oh, right, I'm playing a game," the stronger bonds players will build with that world. But why are these important?

Take a look at everybody’s favorite, Call of Duty: Modern Warfare. We know this is Paris because you see the Eiffel Tower. There is no subtlety and no "experience" of place. You get the same impression of Paris you get from a children's picture book. I could play that level a hundred times and still know nothing of what it's like to live in Paris.

I know exactly what it's like to live on Xenoblade's Bionis. We power our stuff on something called Ether, which we mine but don't really understand how it works. We build colonies and keep to ourselves. The north — no, sorry, the head — is dangerous and uncharted. We've never seen snow down by the legs, though travellers say it appears in the mountains of the right arm. We train defence forces but hope never to use them. It's a beautiful place, but it's dangerous.

I guess you could say that this is the reason for role-playing games: to create a world. But I don't see why we should leave it at that when Valve has been building totally immersive worlds in FPSs since 1999. Portal proved that Valve mastered the art of immersion…to the point that mass-media audiences identified with the game's world (you know, that friend who was never into games and still says "the cake is a lie!" to you, because you like games so it must be funny).

Film directors have been doing this for decades. "Mise en scene" they call it — the components of a scene. Most games manage half of this. Everything in the scene is considered, and nothing is there without purpose. What we have to work on is filling the scene with everything it needs to tell the story. That's when our stories will become the ones that people live in…the ones they never forget.