If you have eyes, ears, and an internet connection, I've no doubt that you've seen the controversial trailer for Hitman: Absolution. There's also a solid chance you've read something of the video game rape culture that this two-and-a-half minutes of facepalm fuel has brought to the forefront.

To be clear, I am under no illusions: A video game rape culture exists, and I continue to see it first hand. Violence against women is normalized, sexualized in some cases, and there's evidence to suggest that women are subject to "a continuum of threatened violence" in the medium (quoted in McEwan, 2009).

Further to that, despite all of the articulate voices that have acknowledged or otherwise engaged with this topic, I'm confident that my fellow straight males can rest safe in the knowledge that our dominance of discourse regarding video games will remain unthreatened.

The many arms of privilege

What makes me so sure? Firstly, there's this piece by Tom Chick defending the tentacle rape card game, Tentacle Bento. If you haven't heard of the game, feel free to watch this promotional video that still makes me feel ill.

Mr Chick's arguments can be summed up as follows:

Mr. Chick fails to acknowledge his privileged status, and I think that cheapens his argument as a result. As a straight male, there is little here that would cause great offense: All of the game's sexual violence is perpetrated against women characters, and there is nothing to challenge his sexuality or make him overly uncomfortable.

Tentacle Bento is designed solely for the male gaze; you can even have your wife or girlfriend feature in the game if you pledge enough money toward the game's development. If you're a straight male and not troubled by the game's fantasy concept, there's little chance that you'd give the matter a second thought, and I'm sure that Mr. Chick's words have given solace to those involved in getting Tentacle Bento off the ground.

Mr Chick's article is a response to efforts by Insert Credit's Brandon Sheffield and Kotaku's Luke Plunkett to have the game banned from crowd-sourcing website, Kickstarter. At the very least, I'll agree that Plunkett's effort is little more than a tip of a cap, but Sheffield hit the nail on the head with the following:

Tentacle Bento’s Kickstarter success is the product of a society that doesn’t take sexual assault against women seriously enough. It shows that enough people think it’s "not a big deal." The argument comparing a game about rape to games about violence is limited by the fact that murder is almost universally penalized in our culture, meaning there is a clear line between fantasy and reality there. With rape and molestation, that line is not so clearly drawn, and it results in "cute" games like Tentacle Bento.

Even in games like Saints Row — that Chick uses as an example in his retort — murder may be trivialized, but there are repercussions for the act (no matter how inconsequential or how easy they may be to avoid). Going on my limited knowledge of Tentacle Bento, it seems that there are mechanisms to stop players from molesting women, yet there's no consequence for the act…save for the possibility that you may not have abducted as many young women as your competitors.

Now let us have a moment of silence for the poor bastard that couldn't rape as many women as the man sitting next to him. The shame that poor bugger must have felt…it must've been unbearable.

However, even with the Kickstarter campaign thwarted, Chick is still able to proudly assert that the naysayers lost the war: Soda Pop Miniatures was able to manage fundraising from their own website, and the game will see release. There've been no cries of condemnation after the fact…just misguided declarations that art (made by people in Chick's position of privilege) has won out over censorship.

The shame of survival

If you missed Patricia Hernandez's deeply moving article regarding her experience with rape culture in the context of Gears of War multiplayer, can I please strongly suggest you stop what you're doing and read it now?

In my position of privilege, I  previously saw the actions described by the author as nothing more than puerile, frat-boy humor. Yes, it was frustrating to be subjected to mock humping and teabagging in a few rounds of Execution, but what did I care? It was just some guys letting off some steam. Worst-case scenario, I could quit and cop a small penalty. I've never experienced anything on par with the personal anguish that Hernandez disclosed in such visceral detail, so it's pretty easy for me to dismiss such hijinks.

For someone who's survived such violation, this behavior becomes something much more powerful and potentially traumatic. Not only can I vouch for the observation that using a woman character's skin paints a target on your forehead, but worse still, her account made me identify the language that I use when describing defeat in competitive environments:

"Those dudes raped me!"

"They had their way with me!"

Such sexualized language is normalized in the context of competitive online gaming. For my part, I'm going to make a conscious effort to cut out this type of banter and instead point out the obvious: My opponents won because of skill, strategy, or luck. Possibly a combination of all three, depending on the situation and how highly I think of myself at the time.

So, that trailer I've assumed that you've seen: What of it, straight-male privilege and video game rape culture?

Rather than regurgitate or otherwise repurpose the observations and opinion of Brendan Keogh (via his blog, Critical Damage), Kotaku Australia's Mark Serrels, and CVG's Sarah Ditum, I thought I'd explore that of other outlets. What I saw constituted an unwillingness to engage with this troubling topic at best and a straight-up denial at worst. 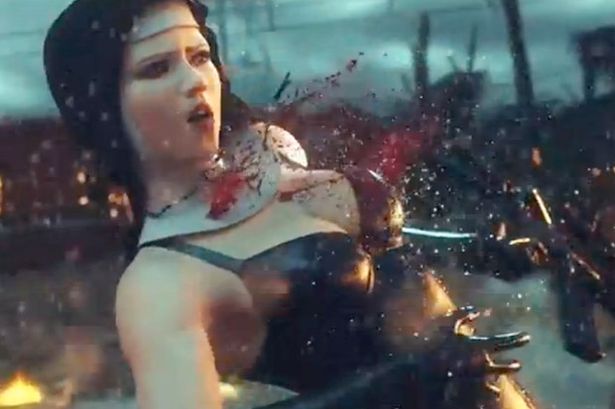 Despite cries of protest, it's pretty clear that hyper-sexualized action, violence against women, and games writing will continue to co-exist in the short term at the very least. The majority of outlets have either refused to engage with the trailer or the rape culture that it represents.

How do you want me to think?

I can't force you to assume my point of view, but I think the lack of formal engagement with the trailer for Hitman: Absolution represents a failure by the majority of games journalists to hold IO Interactive to account for a marketing campaign that is in poor taste. Forget the "Are games art?" debate and the potential impact such rubbish has on the medium's reputation, and forget that the action depicted in the trailer isn't practical using the awkward stealth mechanics I associate with the series. This advertisement is just plain offensive. I don't think it should be banned, but games and gamers deserve better than this.

What did you think of the trailer for Hitman: Absolution? Is the reaction (or lack thereof) justified?