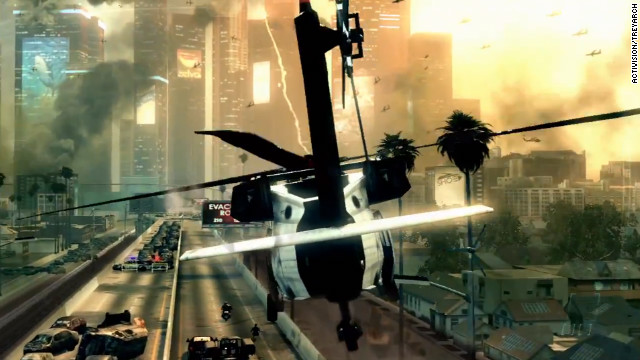 The Black Ops 2 marketing blitz has left me with two questions: Why Black Ops and why are there humans? If neither of those queries make immediate sense, give me a second to explain.

In an extensive interview with Venture Beat’s Dean Takahashi, studio head Mark Lamia  explains that Treyarch is trying to push the franchise in a more nuanced and less orthodox direction. And yet, details about the new entry seem to position the gameplay and story at odds with one another, contrary to Lamia’s explanation that, “[Black Ops 2] started on the story front but also from the gameplay perspective, looking at it on both sides.”

According to Lamia, the “Black Ops” premise allows the fiction to go wherever the game’s designers want to take it, while the futuristic setting allows freedom to develop new systems and mechanics on the gameplay side of things. But how do both of these match up with the narrative thrill-ride Treyarch hopes to deliver and the deviations from the standard Call of Duty formula that are meant to get it there?

For instance, the new element in Black Ops 2 that Treyarch are trying to sell gamers on the most is the addition of Strike Force missions. Lamia explains, speaking this time with Polygon’s Chris Plante:

"You can take over any of your team members and they have different weapons. You can take over any of the tools on the battlefield, so any of the drone technology…I think that's the other thing when you're talking about adding drones and advanced robotics into the gameplay, what that also means is, if you're a game designer, all kinds of new gameplay to both fight against and — so there's new A.I. and new strategies to take it out — but also, in the case of the Strike Force missions, if you want to take over and play, that's entirely new gameplay for you."

Like Driver: San Francisco but with people rather than cars, these Strike Force missions will reportedly allow players to dictate orders to AI-controlled humans (move in on this objective, draw fire from this target, etc.), as well as micro-manage battles by jumping in and taking control of any given team member. Like real-time strategy executed by agents from The Matrix taking place on a Call of Duty map, Strike Force missions aren’t doing anything groundbreaking, except when compared to the conservative traditionalism exhibited by the franchise’s past iterations. 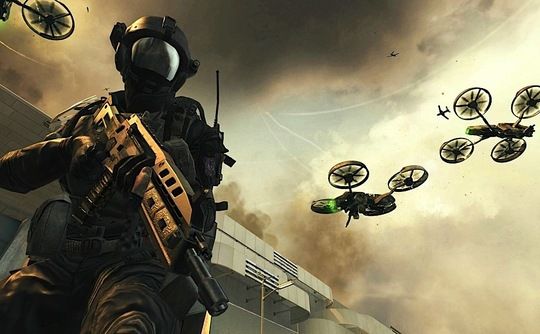 However, if Call of Duty: Black Ops 2 is really about exploring the consequences of current advances in warfare technology, wouldn’t it make more sense to have players only jumping in and out of robots and computers? A big part of the ongoing marketing campaign is this documentary-style advertisement which tries to sell audiences on the realism and prescience of Black Ops 2.

Speaking with people in or around the military, the video paints a picture of a fragile twenty-first century where the U.S.’s reliance on weaponized robots and computers has made it more vulnerable than ever. It’s an interesting proposition, and one that Black Ops 2 is certainly in a better position to explore in terms that are both more conventional and accessible than titles like Deus Ex: Human Revolution and Binary Domain. But, it’s also a hypothesis that the game doesn’t seem to be fully embracing…to its potential detriment.

On the surface, Lamia is clearly referring to the game’s presentation. Nothing would undermine the integrity of the narrative more readily than one-dimensional characters and over-the-top theatrics. Underneath though, I suspect Lamia, consciously or not, is referring to the core experience of Black Ops 2 as part of the Call of Duty franchise.

What he and Treyarch need to keep “grounded” isn’t just the narrative, it’s the entire game. At heart, Call of Duty is the current definition of triple-A blockbuster. It’s what other console multiplayer games aspire to. It means people want to spawn, run, shoot, kill, die, and respawn. Give them new guns, new perks, and a new scenario, but don’t change the underlying basics.

Which is why, although Treyarch is attempting to do something unique and timely with Black Ops 2, it’s undercutting that in other ways.

As Christ Plante explains, Treyarch is commenting on a not-so-distant future that in many ways reflects the present:

For anyone who isn’t aware, the U.S. uses robots to diffuse IEDs and drones to scan from above and fire missiles at prospective enemy targets. These were experimental technologies at the start of the Afghanistan and Iraq wars, but they have since become the norm. Now, these robot chickens are literally coming home to roost as local law enforcement and federal agencies procure similar tech for domestic use. This is the real modern warfare.

Which begs the question: why explore this development through Black Ops rather than the more aptly titled Modern Warfare series?

Why not completely and utterly commit to the theme? Instead of allowing players to jump into the human shoes of fellow combatants during Strike Force missions, why not allow them to jump into the circuits of unmanned vehicles? This is what currently happens in “real” warfare where pilots on one side of the globe control aerial drones that are thousands of miles away, and it’s what Call of Duty has already experimented with (to some degree) via kill streak rewards like the remote sentry, RC car, and drone strike.

But it looks like Treyarch’s hands are tied on this one. They want to push the boundaries of the franchise, but can’t do so at the expense of the brand’s financial prestige. No amount of critical praise could compensate for an economic backslide, and so Black Ops 2’s goal first and foremost is to at least do no worse when it comes to sales than prior entries (no matter how impossible or misguided that objective might be). This leaves me wondering if their decision to be as committed to creative innovation as they are to producing a market juggernaut might end up forcing them to fall short of either one.