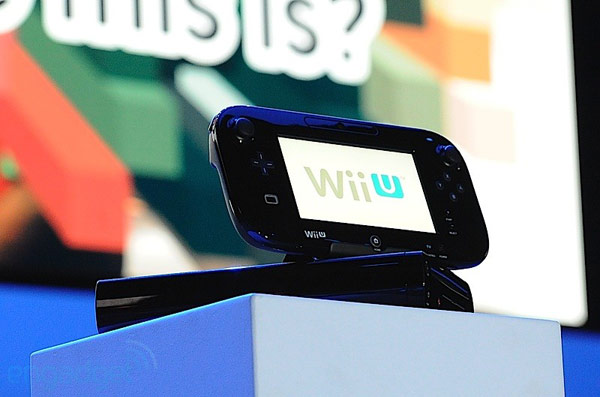 Holiday 2012, that's the date that Nintendo has set for their next-generation console, the Wii U. I have been a huge fan of Nintendo and their products for many years, going back to my first console the NES, but as of late Nintendo's decisions of been a little mind boggling to me, and I'm sure to many other people.

Let's take this back all the way to the announcement of the Wii U at E3 2011. After a few months of brandishing the codename "Project Cafe", Nintendo finally revealed what the actual name would be, Wii U. Not surprisingly Nintendo had decided to stick with the name Wii, except this time adding a U at the end of it. What exactly does the U mean? Nintendo meant for it to mean "You", giving the console more personal customization, while still bringing people together, therefore Wii U. Even though the name isn't exactly good, there is a good reason for it, so it's hard to mark this against Nintendo. But what about their controller?

At E3 2011 Nintendo also announced the most unique part of Nintendo's new console, and that was its tablet controller. Nintendo has been dealing with unique ideas since the DS was released, and the Wii following it, but are we really ready for another generation of Nintendo consoles orbiting around a controller? Last year we saw it with the Wii, where game after game was released with some type of gimmick around the Wii's motion controllers, and we saw game after game that wasn't brandishing Nintendo's name somewhere on the box fail. So where's the draw for third-party support Nintendo? Will Wii U's controller really be enough for me to justify buying games like Assassin's Creed 3 on your console and not Xbox or PS3? Or get me to want to buy games like Arkham City again after already playing it for hours? Sure there is the Wii U pro controller, but how useful will that really be when so many of Wii U's games will certainly revolve around the tablet controller? Yeah I can see some cool features being used with this controller, the idea of a mini map that's always there sounds cool, but again I just don't know if that will be enough.

There is no denying that that the real draw to Nintendo's consoles isn't the hardware, it's the first-party games, so let's take a look at what we know. At this years E3 Nintendo made a huge mistake not showing off more first-party titles, or at least teasing them. The games they did show look good, but at this point it simply wasn't enough. They showed New Super Mario Brothers U, which looks good, but is more of the same Mario, from the looks of it, it won't be much different from its predecessors. They also showed off Pikmin 3, which looks great and is an example of what they should have done more of, simply showing off more first-party titles. For a console that is coming out in the next few months, I expected to see more games. That just unfortunately didn't happen. It appears that the only thing Nintendo was interested in showing was NintendoLand, which doesn't look like much more than a bunch of tech demos.

One last thing I wish they would have talked more about at E3 2012 is Wii U's online capabilities. We don't know much about online play right now other then there won't be friend codes, and there will be a thing called Miiverse. Miiverse seems like a cool thing, but we won't know till its released. What we do know though is that, according to Nintendo President Satoru Iwata, Miiverse will be pretty heavily moderated in an attempt to keep it "clean". This doesn't sound like a bad thing, but one of the ways they are doing this is by having every message moderated by a Nintendo employee before it is posted up on the Miiverse feed, which could lead to delays from the time you posted it, to the time it actually goes up. Beyond that we don’t know exactly what type of features Wii U will have online. I at least hope they have learned something from their competitors and realize people want a true online experience, and not a monitored and limited one.

So although the Wii U’s future isn’t certain, its obvious the Nintendo simply needs to do more if they don’t want to get eaten up by Sony and Microsofts next-gen consoles. They can’t just rely on a new Smash Bros. or a new Mario game. As a long time fan of Nintendo I for one truly hope that Wii U succeeds, but its up to them.