You know, until today, I never really thought about videogame soundtracks. Sure, they can add a little extra ambiance, but I’ve never thought about how a soundtrack can improve my gaming experience.

Then, just like my last Bitmob Wants You/Bitmob Challenge, I began to think about how much this really affects me. Almost all of the games I’ve ever played have music, and I can’t think of a single song that affected me? That’s absolutely ridiculous; do you know how many games I’ve played?

So, I began to frantically go through all my childhood memories, searching for any songs I remembered. Mega Man, Final Fantasy, Super Mario Bros., The Legend of Zelda, Banjo-Kazooie — all too obvious. I may love their soundtracks, but none of them affected me. Next, I began scrolling through the songs on my iPod. There are a few game related tunes, but most of them are just catchy, not memorable. Then I come to this:

A flood of forgotten memories came back to me, all at once. Exploring the sunken ship, running along the bottom of the bay as metal Mario, that freakin’ eel (hey, It was scary at the time). Whenever I was upset, I would stick my Super Mario 64 cartridge in, run to Jolly Roger Bay, and just enjoy the calming atmosphere.

The music played, and I would just begin to feel better. It didn’t matter what had happened before, that was then. Right now, I was in an almost Zen like world, with nothing but a pirate ship, a great big bay, a metal cap for deep sea diving, and a Koopa shell for surfing.

I’m sure there are plenty of people that won’t remember the level as fondly as I do; after all, it is a water level. But it doesn’t matter to me. I’ll admit that, yes, there are better, more challenging levels, but there is not a single level that I love more than Jolly Roger Bay.

All because of one little song.

Now if my nightmares about that ****ing eel would just stop… 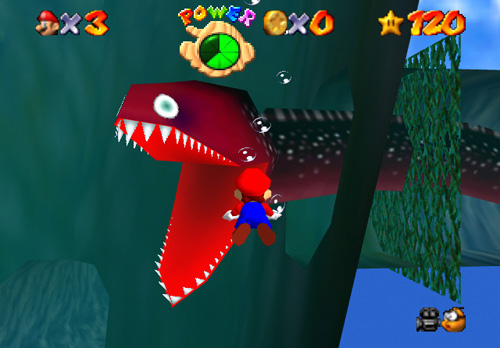