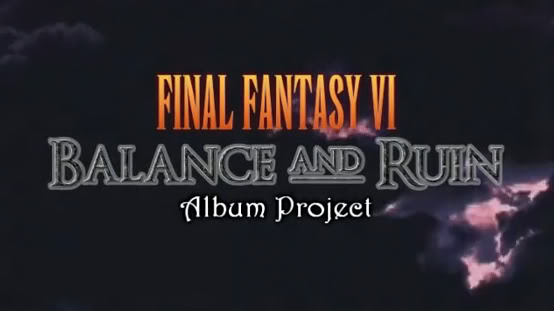 OC Remix is one of the best things to happen to the Internet. Its dedicated community creates hundreds of free remixes and rearrangements of many of the best songs from gaming history.

Of course, despite my love for the music, I never really gave them any money. Well, thanks to crowdfunding site Kickstarter, I can now remedy that. OC Remix asked fans to help fund the creation of a Final Fantasy VI album. That beloved role-playing game for the Super Nintendo had one of the greatest soundtracks of all time, so I think we can all be down with a four disk collection of rearrangements.

"Final Fantasy VI: Balance and Ruin has been underway since last year," states the project's Kickstarter page. "Our goal is to arrange the bulk of the FF6 soundtrack in a varied (but cohesive) range of musical styles; from rock and hard electronic battles to soft ballads, jazzy interludes, somber orchestral marches, and an outrageously epic opera sequence, there will be something for everyone on the album. Though there will be a wide range of genres, we will be also keeping true to the spirit of the original soundtrack."

The project has already doubled its inital fundraising goal on Kickstarter, but you can still donate and receive a physical copy of the music. If you opt to wait, the whole thing will eventually be free to download on OC Remix's site.