Nostalgia is a funny thing. You usually only remember the good things and forget the shortcomings. Robomodo'sTony Hawk's Pro Skater HD is a prefect example. While the skating makes you feel young again, you quickly realize that the mechanics are 13 years old. THPSHD gives you the good with the bad, and that is what gives this title its appeal. The original Tony Hawk was never a perfect game, but it was a fun one, something that translated well into this HD remake. 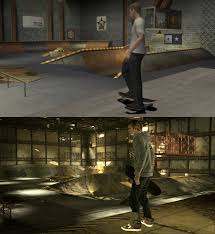 Much like the original, THPSHD gives you no warm-up and no tutorial. It painfully throws you into a warehouse and it is up to you to figure out how to skate. Luckily, the gameplay is simple. You combine tricks and land them successfully to gain a score. Each level has objectives for the skater to complete: Overall scores, collections, and completing specific tricks. While these objectives give you something to do, they're too easy. Technically this was my second time playing this game, and the objectives are in the same location as is in the original. Achieving these is not difficult, and they aren't suppose to be. This is because once you accomplish all of the objectives, you unlock projectives. These projectives are new and extremely frustrating objectives that you must accomplish in a shorter amount of time. This feature add a lot of replay value to the title, and may also cause you to break a few controllers out of frustration.

The controls are also similar to the original. It doesn't take long to get used to the format. The only issue with the controls is not with the game itself, but with the Xbox 360 controller. The infamous D-Pad is like a box of chocolates, you never know what you're going to get. If you press left the game goes right. So controlling your tricks is left up to the joystick, which works but not with precise accuracy. The only real solution for this is to go out an buy the new improved D-Pad controllers.

The other aspect that wasn't changed was the horrible level design. Like I said, they kept the good and the bad from the originals. The level design in “Downhill Jam” is atrocious, it was back in 1999 and it still is today. The level feels archaic and purely frustrating. Other maps suffer the archaic design in certain areas, but this isn't game breaking, its just Tony Hawk being Tony Hawk.

While the controls and objectives are the same as the original, the graphics have been amped up. The HD really comes through in making the skaters and levels look smooth and more detailed. Another change is the implementation of the manual in the first game's levels. It is nice to have this ability in levels where it was absent in the first title.

Another great addition is the level map. This time around you are given a map that tells you were each objective and every gap is. It is a nice inclusion that can help you find all the gaps for major combo points. Also, the collection of skaters is slim, but you can use your Xbox Live avatar which is pretty cute. I customized my avatar to wear a N7 breather helmet for protection. You will be able to level up your skater's stats and buy new boards and tricks in the skate shop. The only issue is that by the end of the game, no matter which skater you choose, you will have all stats maxed out. While this isn't a major issue, it just makes selecting a skater somewhat pointless.

Not everything from the first two games made the cut. Both the character and skate park creators are missing, and only 7 levels are included. However, Robomodo has announced that there will be DLC with levels from Tony Hawk Pro Skater 3. Another noticeable absence is H.O.R.S.E. Mode. This was the best of the multi-player games in the original and it is extremely disappointing that it was not included. Split-screen is also missing, it was replaced by Xbox Live. 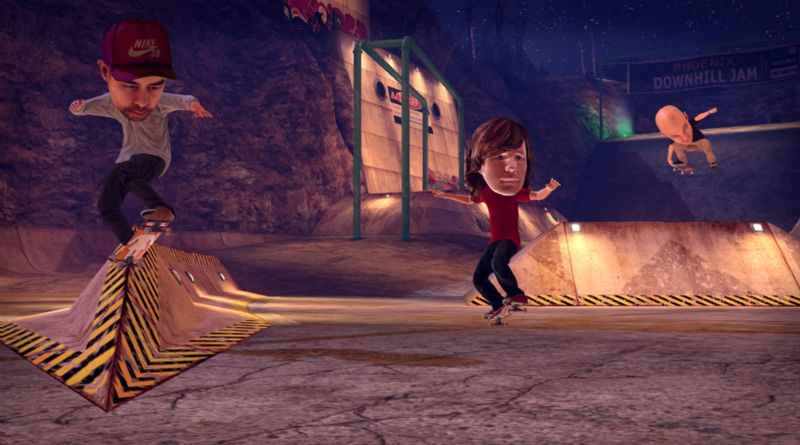 The only way to play with other people is through the internet. For multi-player there are three modes. While trick Attack and Graffiti are back a new mode Big Head Elimination was added. While these are fun, they wear thin rather quick. The charm has always been in the split-screen. Being able to trash talk with your friend right next to you is what made the original so fun, something lacking in the HD remake.

The music is also a mixed bag. Not every song from the originals made the cut. Personally my favorite songs didn't make the list, in my opinion the Dead Kennedys and Primus made the soundtrack amazing. In THPSHD we get a few of the original soundtracks with the inclusion of new songs. While it isn't my preferred play-list it does it job in getting you in a skating mood.

+ The skating is just as fun as the original.

+ The projectives add a lot of replay value.

In conclusion, THPSHD is a best-of title. The best maps from the first two games are compiled and given an HD makeover. The skating takes you back to 1999 when the first game was released. The objectives are fun but simple, and with the addition of projectives it will keep you occupied for some time. For the $15 dollar price tag, this game is a great package. What makes this game so good is that Robomodo didn't change anything except for the graphics. It is the same game as before, with all itperfections and imperfections. And that is what gives this title its charm.

This review was originally published at GameDwellers.com