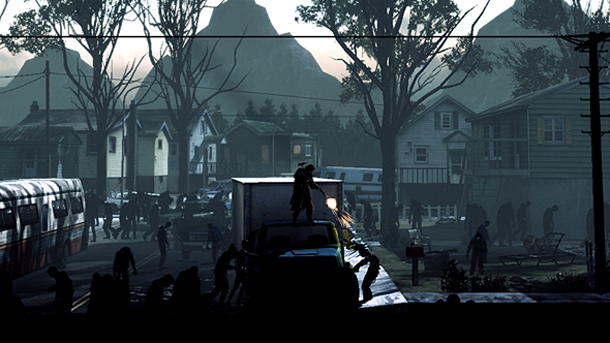 I wanted to enjoy Deadlight, but every time I started to get sucked into the atmosphere, the mechanics would take me out the experience. It was almost as if the game wanted me to be frustrated. I understand that the zombie apocalypse can be a frustrating time, but video games are meant to be fun.

The year is 1986 and you take the role of Randall Wayne a Canadian searching for his family in a zombie filled Seattle. Your main goal is to find Randall's wife and daughter and the “safe point” in Seattle, and he believes that is the most likely place to find them. During the adventure Randall encounters countless zombies, a crazy old sewer man, and an army who cares more about killing survivors than zombies. Deadlight doesn't have the most original story within the zombie universe, however it works in motivating you to progress through the game. The terrible voice acting however, ruins any potency that Randall's personal story offers. Randall's voice is always grim and brooding even when it doesn't need to be, and the acting for the supporting cast is almost comical. And it isn't only the acting that is disappointing, it is also the dialogue. Cliché, cliché, cliché is all I can say about the dialogue. If you have ever watched a zombie movie then you have already heard the dialogue to Deadlight. 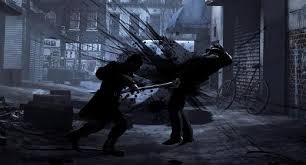 The atmosphere that the game emits is outstanding. The gorgeous back drops of a living dead Seattle combined with erie music adds a lot to the feeling of you being stranded. So do the character models themselves. For the most part Randall appears as a silhouette on screen, while the zombies are only shadows – quite literally. This tone adds great feeling, and as I said before it makes you want to like the game. Then sadly, the platforming gets in the way.

The mechanics of Deadlight or mediocre at best, and at worst they are down right terrible. Only a couple of scenes within the game actually achieve moments of fluid gameplay. With such a detailed background the objects blend in with it, so there are times where it is hard to understand how get by an obstacle. Halfway through the game you will end up in the sewers of Seattle, and it is here where the truly ugly side of the platforming shows itself. The game becomes less about surviving zombies and all about running through a madman's deadly obstacle course. Not only does this take you away from the beautiful desolate backdrops and puts you into the sewers, but the puzzles themselves are nothing but frustrating. Several times I had put the controller down and walked away.

Then there is the combat which is a mixed bag. You will eventually gain a fire axe, which at times works, but if you are too close to a zombie you'll actually miss them. While the gun mechanics work well, ammo is scarce and during the 4 hour game, you don't get many chances to use them. This is disappointing, it would have been nice to have had at least one Left 4 Dead moment in the game. Instead you will only use firearms a few times.

The game will take you between 4 to 5 hours to complete. While there are a few collectables through the adventure such as, diary pages, Ids and mini-games, they don't give you much of a reason to go back and play a second time. The $15 price tag is asking a bit much for only a few hours of gameplay. If they added challenge levels like Shadow Complex did, then I believe you would get your moneys worth.

This review was originally pulished at gamedwellers.com