Your best friend has betrayed you, your home country wants you dead, and you are on the run. Depression hangs over you and your friends like a rain cloud, but something deep within you keeps you going. That something is the shinning power of hope. The hope to make a better world. Eventually in your journey you become the David who defeats Goliath. All without speaking a word. This is only the beginning to the RPG Suikoden 2.

Suikoden 2 is what comes to mind when I think of Role Playing Games. The pinnacle of the JRPG era. What makes the game so special is that you play the role of a silent hero. My character was named, "Mark". In this role I started my own army in the pursuit of saving my loved ones, and destroying pure evil. As this character I encountered success, failure, love, betrayal, and solace. RPGs these days don't reach these highs like they used to.

The term RPG has changed in the past decade. Now you see many titles from varying genres implementing so-called, "RPG" components into their games. For example: Call of Duty added a leveling system into their multiplayer. It seems as if RPG really means gaining experience and allotting points to certain fields. RPG now stands for, "Roll Playing Game" and not, "Role Playing Game". 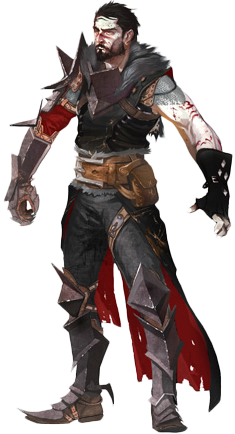 The roles we create ourselves in video games have mostly disappeared. Bioware is the biggest culprit. Dragon Age: Origins allowed you to choose several different races each with their own back-story and once you gained control, they were your character. Then you were able to decide how the character's role would turn out. Dragon Age 2 changed that. DA:O allowed you to choose a wide range of characters, while DA2 forced you into one character named Hawke.

DA2 didn't hold the same spirit as it's predecessor. This is the best example of a title claiming to be a Role Playing Game, yet off no real role to the player. Just because the sequel had an expansive skill tree doesn't make it a RPG. These skill trees are nothing more than character progression. All games have this.

Even in the Mass Effect Trilogy, we run into issues of being forced into a role. While the stories told in the Mass Effect universe are rich and diverse, they rely on supporting characters to make you care about "your" Shepard, but do we ever really care for our own Shepard? I never did. This is the problem with most modern RPGs they disregard the, "Role".

The Elder Scrolls 5: Skyrim is a good example of giving players free reign over their character. Perhaps this is the reason the franchise is so successful. If you want to be a lizard thief who steals from the rich, you can, if you want to be an Orc Paladin, you can. With this the world of Tamriel becomes your world, not the developers world. Here lies the biggest problem with Dragon Age 2. Since the story was linear and forced, we aren't allowed to feel like we are playing a "role" in the story, we are just watching.

It isn't the story or the character progression that makes a game a RPG, it is the role you are given. One could argue that all games are RPGs because you are always given a role. Call of Duty gives us Soap MacTavish, Metal Gear Solid gives us Solid Snake, and Final Fantasy 7 gives us Cloud Strife. The main and key factor that makes a real RPG is being able to play a role that will adapt to the player's ways; while other games just give us a role to participate in. The former giving us control over the story, the latter giving us a vessel to watch a story unfold.

And somewhere in between we get Suikoden 2 which allows us to participate, and mold our own character into a story that is unfolding before us. This is why I think of Suikoden 2 when I hear the phrase, "Role Playing Game".