If Fallout 4 is set in Boston, the first thing I'm doing is heading North. I live 10 miles north of Boston and am curious to see if my city gets the post apocalyptic treatment that only the Fallout series can deliver. Boston is the perfect city for the Fallout series, but it's not that big. There's plenty to do in the city, but you can pretty much walk anywhere in Boston if you're feeling adventurous.

I'm curious to see how much of the state of Massachusetts is up for exploration. Fallout 3 had parts of Maryland and Pittsburgh as well as Washington DC. Fallout: New Vegas was pretty big as well. There's plenty of areas in Massachusetts that could be recreated. There's the North Shore, South Shore, Central Mass, and the Berkshires to name a few places. I could see Fallout 4 having DLC set in Cape Cod similar to Point Lookout in Fallout 3. Providence Rhode Island is about an hour south of Boston. That might be close enough to be included in the game. If Fallout 4 is set in Boston, I'm exploring every nook and cranny of that map. 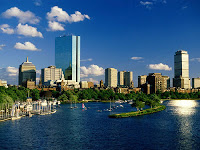 Regardless of whether Fallout 4 is set in Boston, I just hope the developers take their time with this one. Fallout: New Vegas felt rushed. I don't mind waiting a few years for a phenomenal Fallout game. I don't play New Vegas anymore, but I still play Fallout 3 to this day. That game is going to be hard to top, but if the location is set in Boston, that's definitely a good start. Please let this rumor be true.