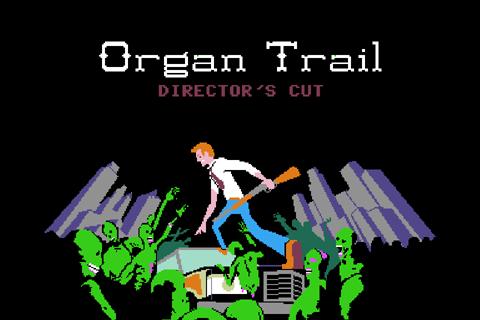 Organ Trail is a Kickstarter success story that began with a good idea and delivered more than it promised.

Like us, you’re probably tired of zombies. With exception to the Left 4 Dead series or the Walking Dead franchise, we can probably do no better than to stop antagonizing the zombie concept. Ironically, it’s for that very reason that we really shouldn't give Organ Trail a chance that it so beautifully succeeds. 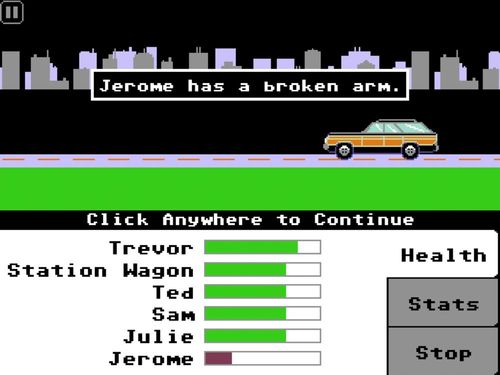 Organ Trail takes a classic game from our formative years, Oregon Trail, and redecorates it from edutainment to pop culture. At the core, the game focuses on the same concept, survival. Like Oregon Trail, the objective of the game is to survive the entire route. At the start you get to name your companions and are given the opportunity to gather the resources and consumables you believe you’ll need to succeed. Spend your limited starting time stocking on food supplies and car parts and you may fail to collect enough money for unexpected emergencies or lack the sufficient number of first aid kits. While on the onset, your early choices may seem extremely valuable, they will appear less significant as your journey continues.

The game stays true to its roots and plays exactly like Oregon Trail, but it’s a homage with a big payoff. Roughly 30-50% of your time with Organ Trail will be spent looking at your station wagon traveling across the United States while your resources drain away. Your gas will plummet, your characters’ health bars will decrease, your best friend will get dysentery and for no reason your characters will break an arm. In these instances it won’t be a bad idea to stop and rest to recuperate health or use a first aid kit. Characters gain more health in cities and you have an opportunity to trade with NPCs, a good way to trade items you have a surplus of, in exchange for items you’re without. Assuming of course, anyone wants your excess (which is not often).  If you have any amount of nostalgia for Oregon Trail, you’re likely to get hooked, but these aspects are really only half of what makes Organ Trail worth jumping into.

The other half of Organ Trail is consumed by the game’s ability to coalesce zombie culture from the geek zeitgeist into real gameplay scenarios. If you’ve entrenched yourself within enough zombie games, shows or movies, you will find yourself thinking, ‘hey, didn’t something like this happen in ‘such or such.” Similarly to the characters in the Walking Dead you’ll be defending the wagon from incoming zombies, foraging for food and fighting off fellow non-zombies .

Whether intentional or not, the game’s pace does a great job of replicating what you would expect to happen in a true zombie apocalypse.  You’ll forget the zombies are even a threat when you’re fully stocked up on supplies, but find yourself out of food or ammo and watch the pace come to a sluggish halt, the game’s biggest weakness. That’s not to say the mini games are bad. In most cases they involve shooting zombies with your shotgun in a motion similar to Angry Birds, pull back and release to fire. The problem is the frequency in which you must play them. While the game’s mini games are fairly skill based, they range from exceptionally difficult to exceptionally easy, but when a typical turn takes a simple tap, bogging down your journey with mini game after mini game as you try to gather the resources you need to continue quickly wears thin.

Whether you played Oregon Trail or not, doesn’t really matter, if you haven’t been living under a rock, the ‘nods’ to zombie culture is more than enough to help you ‘get it.’ While I played the game on my iPad, I found myself thinking it was more apt for a phone. The game is more fun in bursts than long play sessions and if you know someone that isn’t hugely into gaming, I believe it has universal appeal. For $2.99 it’s easy to recommend.

When Carlos isn’t busy being Operations Manager to a small business, Carlos is sitting awkwardly in a social gathering or playing video games. He lives in game design purgatory as he works from time to time on his strategy based card game trying to figure out what will make it ‘work.’ He also digs the use of the word ‘dig’ and can be found 50% of the time with a rum and coke. See more of his work at TapTapStart.com.