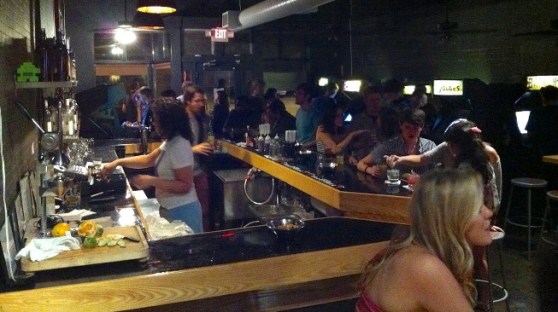 Our culture is obsessed with things returning from the dead. Why not the video arcade? About a month ago, Ars Technica published an article that sounded almost too good to be true, “The Surprising Stealth Rebirth of the American Arcade.” I was somewhat skeptical; I have fond memories of time spent in arcades as a youth, but I was never privy to the true heyday of the video arcade in the ’80s.

I wasn’t willing to believe that arcades could make a comeback for only one reason: I wanted it to be true, and so of course, it was never going to happen.

Then one opened a mile from my house.

Last night, I took a couple of my friends to check out the Joystick Gamebar in Atlanta, and after a night of cocktails, quarters, and aching wrists, I’ve changed my tune.

To borrow a line from our friend Fox Mulder: I want to believe.

Joystick proved to me, in a few short hours, that establishments like this really have a shot at success. A handful of factors have convinced me that we’re going to see more and more barcades pop up in the next couple of years.

First, booze goes a long way toward making an establishment profitable. Let’s face it: A place like Joystick isn’t going to be making its money from quarters, especially when it does the honorable thing and keesp the price of the games cheap. (X-Men arcade? 25 cents. Galaga? 25 cents. Street Fighter II? 25 cents. In fact, the only machine to cost more than a quarter was Rampage: World Tour, which required a hefty 50 cents.)

Beer and cocktails, though, can bring in money at a respectable rate. Joystick has several original cocktails (including one with homemade chai soda!) and a very palatable beer selection (Brooklyn Lager on tap!). By ensuring that an individual could come for the drinks and the friendly atmosphere and have a good time without inserting a single coin, a barcade can ensure that its livelihood isn’t dependent on the games it has to offer even if those are a big part of attracting its clientele.

Some of the arcade owners in the Ars article seem to attribute the recent revival of the arcade to the fact that nostalgic gamers are now old enough to be drinking and that the bar/arcade model is viable now in a way that it didn’t used to be … but I don’t think that nostalgia entirely explains this transition. After all, haven’t huge numbers of gamers been old enough to drink for a decade (or two)? Sure, I’ve got fond memories of my uncle’s Space Invaders cocktail cabinet, but that thing was an artifact even when I was a kid. I’ve got a different theory.

The rise of mobile gaming has created a sea change in the way our culture as a whole (and not just gaming culture but pop culture in its entirety) views the gaming experience. Over the last three or four years, buying a game for a buck and playing it for twenty minutes or so before letting it sit, forgotten, on your iPhone has become the norm, and this isn’t just something gamers do. It’s something everybody does.

That’s right. You can thank Angry Birds for the resurgence of the arcade.

Arcades died off in droves in the mid-to-late ’90s when the calculus of price-to-enjoyment-ratio shifted as a result of the increasing complexity of consoles. As prices rose to catch up, gamers started asking themselves: “Do I really want to drop a buck on six minutes of Tekken 2 when I could have an infinite number of minutes for 50 bucks?”

If you were going to fool around with Yoshimitsu for more than a couple of matches, you started to think that maybe it might be more worth your time to invest in a PSX copy. Eventually, the only way that arcades could entice people to spend was by giving them things they couldn’t possible get in their living room, like motion sensing technology, big dancing mats, or plastic guitar controllers.

With the rise of smartphones, though, something changed. Games became cheap — woefully cheap — and the touch screen interface immediately suggested to developers a simplistic mode of play. Whether you think Angry Birds, Cut the Rope, and Tilt to Live are simplistic and boring or pure and beautiful, you can’t deny that their gameplay aesthetics harken back much more to the arcade games of old than they do the triple-A console titles into which we invest our big bucks.

And it’s not just gamers playing mobile games, as I said, it’s everyone. I teach middle school students who have never picked up an Xbox or PlayStation controller in their lives, but they come into class decked out in Angry Birds gear like that flippin’ red avian was Mickey Mouse.

Our whole culture has come to value simple, pure gaming experiences for a very low entry fee. And I know that mathematically this doesn’t make a whole lot of sense, but I see a huge difference between the following comparisons in a person’s mind:

You can buy Galaga on your iPhone for $2.99, or for the same price, you can have 12 plays in the arcade. Which gives you more value? The answer to the question isn’t really the point, it’s that your answer to the question doesn’t automatically paint you as either “gamer” or “uninterested.” When games are simple and cheap, anyone can invest a little time in them —  “gamer” or not — especially if you’ve had a couple specialty cocktails.

Hopefully, between the booze and the changes in gaming aesthetic that have occurred over the last couple years, these barcades/gamebars/arcade-taverns that are starting to emerge in cities across the nation are a permanent fixture in the urban landscape. But I am not willing to leave this to chance. I submit, dear gamers, that we need to get out to our local game bar and give them our quarters!

Let’s hear it in the comments: Are there barcades in your area? How are they faring? What can we do to support them? (Do any of them happen to have a copy of The Ocean Hunter? I never got a chance to beat that ….)

If anyone wants to meet me at Joystick, I’ll be the guy at the Galaga machine in the corner drinking a “Last Level.”