The JRPG battle theme is its own genre of music. Even under the wide, inclusive umbrella of "game music" as a whole, there's nothing that has quite the same flavor as the tracks that start playing when you crash into a monster and you're taken to the battle screen. 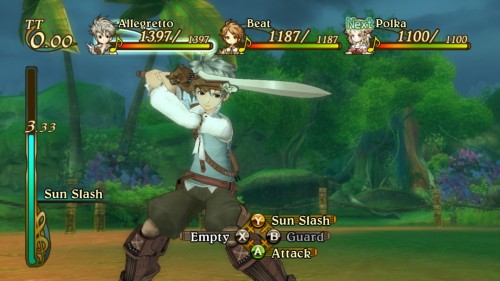 You could argue that battle themes take their cues from a wide variety of genres: some are rousing, orchestral pieces, many have elements of electronic prog-rock, and still others borrow styles from unlikely sources (funky saxophones? Smooth jazz?). Nevertheless, no matter what their influences, there's something about a battle theme that makes it instantly recognizable as such.

At this point, if you're a fan of game music at all, you're probably familiar with the classics of JRPG battle themes. Final Fantasy VII's "Fight On," Chrono Trigger's battle theme, perhaps even Super Mario RPG's "Fight Against an Armed Boss." But there's an awful lot of superb battle music out there, and I've got a few gems to lay at your feet which you may not have heard before.

If you enjoy a good battle theme like I do, I encourage you to give these a listen. You may be surprised.

I'll admit that Golden Sun couldn't keep my interest through to its conclusion. I think I completed about 60% of it before I got distracted by something with a little more meat on its bones, gameplay-wise. That doesn't change the fact that, at the time of its release, it was by far the prettiest battle system I'd ever seen on a handheld. It also had a really, really engaging standard battle theme, which made grinding through its various dungeons much more enjoyable. Both visually and aurally, battles were really a treat. I don't know if I would suggest taking the time to pick the game up at this point, but give this track a listen, at least. Rockin'!

I'll be straight up with you: SaGa Frontier is a mess. All of the weird, nifty systems that the SaGa games try to implement were on full display here, but the game was visually cluttered and very difficult to follow. You often had no idea where you were supposed to be going or what you were supposed to be doing, and it was difficult to figure out what was happening in each character's story. I started the game as a couple different characters, but I couldn't get more than a couple hours in each time before I threw up my hands in dismay.

But the music! The battle themes were absolutely amazing, and there were like fourteen of them, at least if you counted the unique final boss music for each of the seven different playable characters! Just like Golden Sun, I don't think this is a game that I'd recommend you try out, but you should definitely sample some of the battle tunes. This soundtrack is a forgotten treasure of the 32-bit era.

Eternal Sonata is a game that appeals to a very niche audience, but what it does, it does very well. It's got an engaging, action-oriented battle system (sort of like if everybody politely took turns in a Star Ocean game), lovable characters, and beautiful, beautiful graphics and art direction. I'm not sure I can think of another JRPG this visually lush, save maybe Chrono Cross. Unfortunately, the game suffers from some of the weaknesses of classic JRPGs (what's your tolerance for somber, pseudo-philosophical pontification?), but there's an awful lot here on offer for fans of the genre.

The music, by genre veteran Motoi Sakuraba, is appropriately orchestral and epic–it is a game about Chopin, after all, as ludicrous as that sounds–and the battle themes are no exception. "Leap the Precipice" is probably the best of the lot, which is good, as it's the one you'll hear in 95% of the battles. Okay by me!

Radiata Stories is a weird game. It has an interesting, wagon-wheel shaped world, some Suikoden-like elements in terms of character recruitment, and a quirky battle system that's partly founded on a mechanic that involves tying your characters together in a formation and ramming them around the battlefield at anything you can hit.

I love this piece of music. I think that the sax fits the bizarre tone of the game perfectly, and it's at once immediately identifiable as battle music and yet… very unorthodox.

I've never played Lufia II. Statistically speaking, you probably haven't either. That leading horn melody, however, gets me every single time. If my life were a JRPG, I would want to fight bosses to this music. I think that would be pretty good. There's something uplifting and energizing about this track, and it manages to convey the high-stakes tension of a boss battle while at the same time give you the feeling that you and your companions really are heroes–and that means that you're going to come out on top in the end.

So there you have it– five superb battle themes from games that are somewhat off the beaten path, even for fans of the genre. I hope that you found something you liked! Feel free to share additional pieces in the comments–there are a lot of RPGs that aren't Final Fantasy!

This article was originally posted at The Lost Levels.