Whlie perhaps past its prime as to relevance, the video games as art debate found prominence when Roger Ebert infamously blogged that video games could never be art in April 2010.  A few months and 4,000 plus comments later, he conceded that gamers could have, for them, an experience of playing that is art.  This past March, the Smithsonian American Art Museum opened up The Art of Video Game exhibit to some fanfare as evidenced by articles in the New York Times and USA Today.  If you didn't already know, "there are more of us than there are of you." 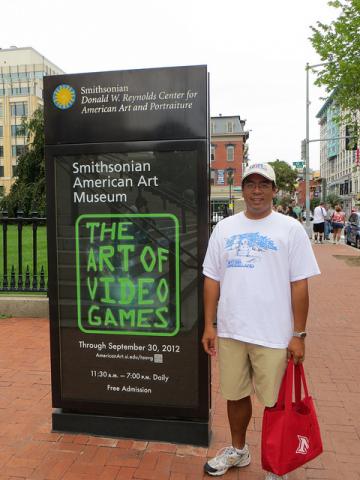 This past weekend, my wife and I made a trip to Washington, D.C. in large part, to view the exhibit before its close.  Housed in the American Art Museum, the exhibit shares building space with the National Portrait Gallery.  The sheer contrast between the quiet reverence while strolling about the presidential portrait collection with the din and clamor emanating from the video game exhibit was inspiring.

In many ways, the exhibit itself was understated.  Despite a larger than life video montage replete fast and dizzying video game clips, flashing lights, and a frenetic 8-bit inspired soundtrack at the exhibit's entrance, a walk-through the entire exhibit could be as brief as an average game of Donkey Kong.  There were five game stations with mini-demos of five games that were not part of the fan voting: Pac-Man, Super Mario Bros., The Secret of Monkey Island, Myst, and Flower.  Each station provided a few minutes of gameplay limited by timer, not player ability or goal-oriented. 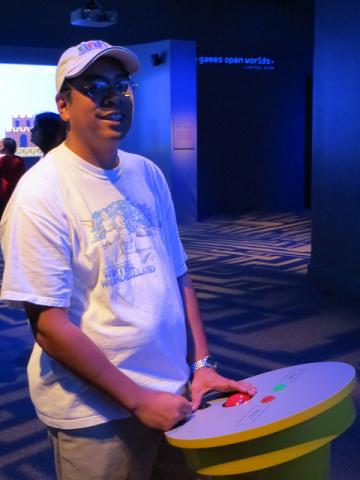 The heart of the exhibit explored four genres through five periods of game development.  Beginning with the Atari VCS and moving through today's current consoles, the exhibit detailed examples of action games, target, adventure and tactics.  Each console had a station where the visitor could select a category and hear a brief description of the selection's significance or reasons for inclusion.

Information included historic and graphical details.  Pac-Man on the Atari VCS, for example, displayed only one ghost at a time thus producing a flickering effect.  The Mass Effect 2 description explored how a strong attachment between protagonist and game player was forged through both the player's creation of the protagonist's appearance as well as control of his or her in-game decisions that affect story outcomes.  Eighty games received this treatment.  I would think by no sheer coincidence, the Atari display is near the PS3 display.  The juxtaposition of Pitfall! to Uncharted 2 stands as testament to the evolution of the art form. 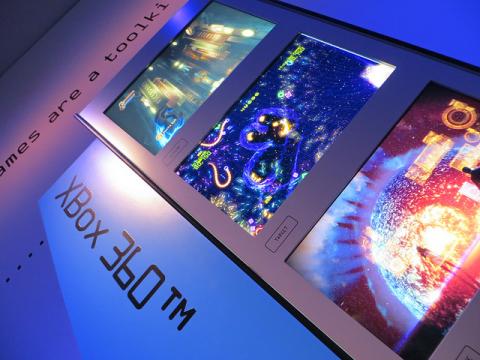 However, given the medium, the exhibit can be limited to only a cursory glance of the art of video games.  The exhibit, soon to hit the road, could easily be exported as video segments online.  I would compare it to seeing the AFI list of the greatest movies ever made.  Certainly, seeing a clip of Phantasy Star can render one nostalgic, hearing the strains of Legend of Zelda's theme music can be goosebump-inducing, but to experience video games as art requires commitment, time, skill.  Reading a play is not the same as seeing the drama acted out on stage.  Getting to World 1-2 in Super Mario Bros. only inspires a person to dig out an old NES or GameBoy copy to play through the entire game.

In visiting the exhibit, I was not quite sure what to expect.  I was not quite sure what I wanted.  I think in many ways, what gamers want is a recognition or a legitimacy to their pastime — that playing video games is more than just a hobby but something that could be seen as worth or passion-inspiring.  We want others to understand, if not appreciate, why we spend hours playing games, go to the store at midnight, name our pets after King Hippo or Master Chief.

Interestingly, I think the exhibit does that though not through its compilation or treatment of games.  While handled impressively and seriously, the exhibit cannot be exhaustive.  Others would note exclusion of controversial titles and topics to the point that the exhibit would be generously marketed as a rated E title by the ESRB.  No, what the exhibit does best is create an opportunity for the gaming community to come together.  The shared experience of games has helped transform the gamer as fringe member to part of the collective majority.

More pics of the exhibit can be viewed here.