The shot above is from Roberts Space Industries which can be seen after signing up on the site which shows a countdown to October 10th. Not sure what the picture represents yet, but it's a good guess it's concept art for one of the places you'll be visiting within the exciting new project that Wing Commander creator, Chris Roberts, may be returning to space with. Or, at the very least, something sci-fi.

Roberts has apparently hung up his producer's hat for awhile to build a whole new game that's obviously got something to do with his space combat days with Wing Commander. But as for other specifics, only bits and pieces of fiction are being posted on the site to whet everyone's appetite for now with more is promised in the coming months.

With Chris Roberts seemingly back to his old haunts, I thought it might be neat to turn the spotlight on another project that he had (or still has) in the works before he left Origin and founded Digital Anvil – Silverheart.

I first caught mention of this in Next Generation's January '96 issue which included a story on Origin filled with a number of interviews including one with Chris Roberts who mentioned this game as his next project following WC4 that he hoped would "be coming out next year."  The mysterious project, which he hinted at as far back in the Official Guide for WC3 in '95, turned out to be something completely different than anything he had ever done.

It didn't happen, unfortunately, but according to Next Generation's story, it would have followed the same FMV style that Wing Commander was currently on and take place in a fantasy world that he had asked English writer, Michael Moorcock, to create for it.

From the features being touted, it sounded fairly sophisticated for the time:

The last point was particularly interesting. Arx Fatalis from Arkane Studios would independently implement a mouse gesture-based system six years later in 2002. And in 2003, Digital Anvil would pump out Freelancer which focused on the mouse as its main interface.

So Silver Heart had seemed to become the FMV fantasy game that never was with the kind of cutting edge ideas that made the Wing Commander series such an iconic space combat sim.

But was that it? Scrounging around for answers, the answer seems to be a combination of where the technology wasn't good enough at the time and where EA may have also simply pulled the plug.

Chris Roberts checked in with the hardcore Wing Commander fans over at Wing Commander Combat Information Center News in a chat last month on August 10. On Silverheart (now without the space which is how it appeared in Next Generation):

LOAF> Can you tell us what "Silverheart" was going to be?
Chris_Roberts> Loaf – Silverheart is cool _ I still have (and own) that IP and want to make it one day. Michael Moorcock (of Stormbringer fame) created the world and wrote the script. 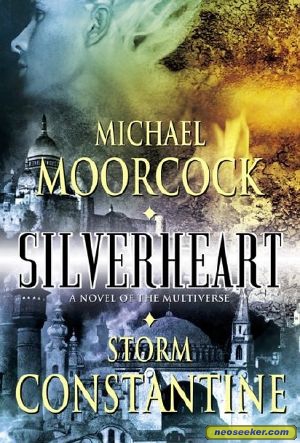 And as to its fate:

Chris_Roberts> We were in production on Silverheart at OSI before I left but we could never get the tech to work. We needed a livign breathing city – something Assasin's Creed does so well nowadays

Also mentioned before that was the question of the novel which actually did come out based on the ideas for the game.

The book was done as a collaborative effort between authors Michael Moorcock and Storm Constantine. Also called "Silverheart", the novel initially came out in 2000 in the UK and, years later, be available in the US. Moorcock himself addressed questions on this at his own site, Moorcock's Miscellany, where he often interacts with fans.

In a post that archived his response to a question on Silverheart way back in 2000, he answered:

Confusing titles for one book. It will be Silverheart and is likely to appear in the UK in Autumn 2000. It's written by me and Storm Constantine and I'm really delighted with Storm's contribution. Based on and extending the game I wrote for Chris Roberts some while ago and which Chris (and Digital Anvil) are planning to revive (though not as live action).

In another reply in the same year, he describes just how massive the writing project was:

I was originally asked to provide a scenario for a game. My condition, in writing the game, which at the time was going to be live action movie/game as some of Chris Roberts's other games, was that we dump genre conventions and didn't have super villains with booming voices for a start, but people with different interests, different moral notions of how to order the world. Once we'd agreed the basic idea I sat down and began a scenario so detailed that it became a short novel of some 45,000 words. By this time we also had the script I had produced for the movie and for the game — re-done from the original ideas. It's still ambitious, but I don't think we'll have live action. I haven't asked Chris what he thinks.

We also get some idea, at least from Moorcock's side, of how much the project cost before it was apparently canned by EA in a reply dated January 22, 2002:

You might be thinking of SILVERHEART, which was originally done for Origin (Electronic Arts) and then taking over by Digital Anvil (essentially Microsoft) but by last year they had disappeared and I really have no idea any more what's happening with the game, which exists in very sophisticated script form, with the entire game mapped out. They had done about $2m worth of work on it — some superb fresh artwork, great new engines — when EA pulled the plug. D.Anvil presumably now own the rights, but I don't know what's happened to them!

But we do know now what happened to Roberts and company. Freelancer arrived in 2003 for Windows, but it, along with Brute Force for the Xbox, were the only two games to come out from the studio.

Aside from also being involved in SFX for the Wing Commander film, nothing else was heard from the company. Microsoft dissolved it in 2006 moving personnel to Microsoft Game Studios while others left to pursue interests elsewhere. As for Chris Roberts, he had long left the company when Microsoft first took it over in 2000 although remained an active consultant to Freelancer.

Roberts didn't return to gaming after feeling "burned out" and sought new pursuits to flex his creativity. Over the last several years, he found that outlet in Hollywood as a producer of films such as Lord of War. And now, in 2012, it looks like he's finally itching to get back into gaming with his latest adventure.

But what about Silverheart? Judging from the chat transcript above, he still has the IP. It's not too much to wonder that quite possibly, the production sketches, scripts, and whatever else may have survived all of those years in moving about. And he still wants to make it.

Imagine a fantasy setting with a city as detailed as any in Assassin's Creed. Add in an extensive backdrop written up by an author such as Michael Moorcock avoiding cardboard cutout villains with a "booming voice" focusing instead on individuals and motives while dumping fantasy cliches, blend in the expertise of an experienced developer like Chris Roberts, and it could be the beginning of something exciting. After all, it was hoped that it could have become a new IP for Origin.

As different as it is from what Roberts has done in the past, part of me also wants to see what the developer who has always pushed the envelope of storytelling on PCs will do with it. This is the guy who made countless would-be space pilots feel Spirit's sacrifice, blend Hollywood techniques with gameplay as we took to the stars in the final hours of a war for survival, and deliver an iconic finish in a post-war world after the guns fall silent.

To me, that could be about as amazing as seeing Wing Commander for the first time on my 386SX.