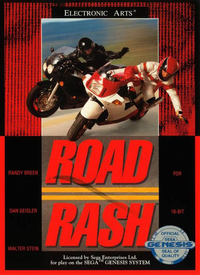 1-Hour Runs is a series of posts I began recently on my blog, Taipow.com. The intent is to discuss a game's merits based solely on the first hour of play.

The idea was born from the fact that I've accumulated more games than I'll ever be able to play in my lifetime. In order to see more of what I already have available to me, I posted my library at backloggery.com and use their random search function to determine what game to choose for each post.

I was surprised to find out that I would be playing a Sega Genesis game today with only eleven games in my current library (http://www.backloggery.com/cheetorlives). When I moved from Chicago in 2005, some of my games were left behind in favor of others, and much of my 16-bit collection still hasn't made the trip. But despite the small selection, my random choice for today was Electronic Arts' Road Rash on Sega Genesis.

A little over a year ago, I had purchased the EA Replay collection for PSP on a trip to People Play Games in Chicago. For much of the week that followed I played Road Rash, a few races each night before bed. I don't recall really getting into the game as much as passing time while trying to fall asleep.

As I child, I recall loving these games. But over the years, the specifics of each title blur together, and I don't remember what changed between the releases. For the sake of nostalgia, this is a good thing.

In 1991, my mind was probably blown by this game. For a 6-year old, racing motorcycles while punching and kicking your opponents sounds like the best idea ever. And a lot of the basic mechanics of the game hold up today. But just like many of the retro games of the 80's and 90's, Road Rash may have been better left in 1991.

By itself, it is incredibly simple. Race against 14 computer-controlled bikers for the top spot in each race. Earn money to buy more powerful bikes. Place in the top three to advance to the next level. There isn't even a menu to navigate. Once you press start, you either choose a race, buy a bike, or change your name. There's also a technologically advanced password system to save your progress.

The competitive loop of this design is what I think keeps the game fun 21 years later. But the slow pace of progression from bike-to-bike and level-to-level made a great attempt to put me to sleep within an hour.

After the first twenty minutes I had already seen all six pale, green and brown courses, set along strips of California highway. Looking at this game for over an hour could make one think that the entirety of the state of California appears to be having a perpetual drought. And judging by the amount of oil spills and what appeared to be urine puddles all over each track, this may be true. It's no wonder California is bankrupt. 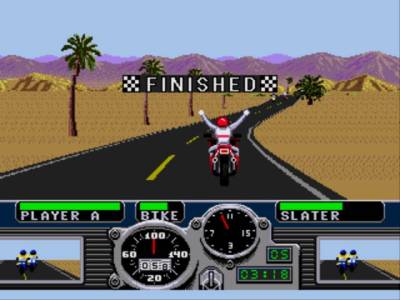 It's also rather unfortunate that there are only six courses because there are only six songs you'll hear while racing. See, if you remember the Genesis fondly, I doubt it was for the tunes. Sure, some games have tolerable soundtracks. But most music from Genesis games sound like someone played a song by dragging it across aluminum siding.

I was quite impressed with my own deteriorating skill though. Many times when I try to play retro games that I used to consider myself good at, I see the 'Game Over' screen almost as fast as I press start at the title screen. With Road Rash, I was able to place in the top-3 of five out of the six races on my first attempt. Of course, after upgrading my bike and advancing to the next level, that changed.

When you move to the next level, you are also faced with tougher opponents, more obstacles, and longer races. Oh, and more urine puddles along the road. Seriously, what or who pees this much on a state highway?

The second level brought me a lot more 5th and 6th place finishes, as well as a few run-ins with the law. Even though I was able to upgrade my bike once, it didn't matter at this point. If I was fast enough to stay competitive in the races, I sure as hell didn't stay on my bike long enough to find out. And this is when my hour ran out, so I was glad to be out of time.

Road Rash mostly holds up against other racers of its time. Its biggest competition in the mind share of our passing interest is itself. That's right! The sequels to this first outing for the series strip this game of its dignity. As many game series do, everything gets an addition, thus making the first game almost useless. And since this title doesn't have a story to pay attention to, or even graphics or music to get all gushy about, you may as well skip this and try the second or third title. 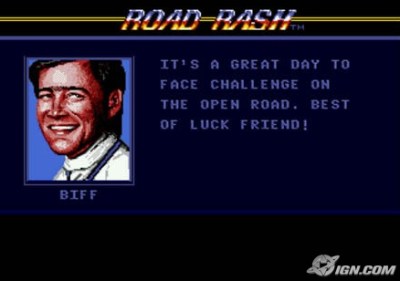 I highly doubt I'll ever complete this game. In my quest to actually play games that I own, I can't find myself wanting to go back and spend the time to grind through races and earn cash. I also highly doubt that the reward of finishing this game is significant. The best that they can muster up between levels is one of the opponents' mugshots and a very 90's block of text telling you one sassy line or another. If that's the endgame, I'll just file this back in a box.

This was also the first time that I used my JVC X'EYE. Since I first saw this machine back when I worked in a gaming store that sold retro games, I wanted this. Luckily, it was a friend that bought that one I saw and he recently passed it on to me. I was impressed to find out the thing still worked. I was even more surprised to find that the disc drive not only worked, but was almost silent. It was quieter than any current-gen console, and definitely not as loud as its cousin, the Sega CD.

Now, if you have no clue what the JVC X'EYE is, I will explain. It is a Genesis and CD combination that Sega didn't manufacture. For one reason or another, JVC thought that the world needed this and with the inclusion of state-of-the-art karaoke technology, this hardware was sold in stores. Somewhere. I sure as hell never saw one. I hadn't even heard of it before it came into my store some nine years ago.

As stated above, this is a repost of an article from the blog I co-write at Taipow.com. We also record a weekly podcast, called the PoWcast, which goes up usually on Wednesdays. Please check it out, leave a comment, like the facebook page, and so on. We would love to hear your feedback.