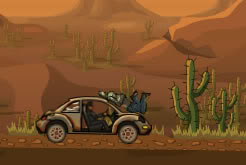 How could an upgrade game where you drive your busted car through zombies be more engaging?

Sometimes when my brother comes home and turns on his PC, he will watch some annoying anime on Youtube or Flash films on Newgrounds.  Occasionally he will play games on this site, with one series that keeps him hooked is games associated to the upgrade genre.  These are games that usually have a linear level for players to push through, but restrict their mobility from fuel or gravity and require the purchase of upgrades to move even further in the level.

Earn to Die is a good example of this genre.  In the game you are meant to drive a busted-up car through zombies and obstacles to reach a rescue helicopter.  You have a limited amount of fuel, ammo for weapons, and boost-fuel (used to propel you faster) per day.  You earn money from killing zombies or making a couple of feet closer to the helicopter.

I first thought of these upgrade genre games as simplified version of RPGs.  Which makes no sense to me as I thought JRPGs do that fine.  Yet it seems like developers like Toffee Games are pretty happy to give casual gamers the bare bones of an RPG system.

In some ways I respect the idea of these genres.  I like RPGs for the purpose of developing a character through time, so upgrade genres appeal to me.  However, the game designer part of me thinks that this genre is more tedious work than engaging gameplay found in other grind-heavy games like Torchlight.

I don't think there is ever such a thing as a 'casual' or 'core' game, as a good game should tailor to both players.  With Torchlight I'll be going through a linear dungeon, gathering loot that would make my character look more awesome.  But the dungeon-crawler also spawns random events and bosses that could impede my way, which makes me think that this mechanic would work well with upgrade genre games.

Using Earn to Die as an example, what if some days the player has to drive through night?  This would obscure the vision of the player, making them not sure when to use their boosts at jumps.  What if some zombies are weak against attack elements like electricity or fire.  So the player would have to specialize in tasers or flamethrowers to get through them.

What I would like to see in my game is a variety of elements that appear randomly in each session.  Boredom seeps in when players can predict what could happen next in the game, so they lose engagement or desire to play the game.  I think the upgrades genre is an interesting genre that could be experimented with, but for now they make driving through zombies feel like a chore.