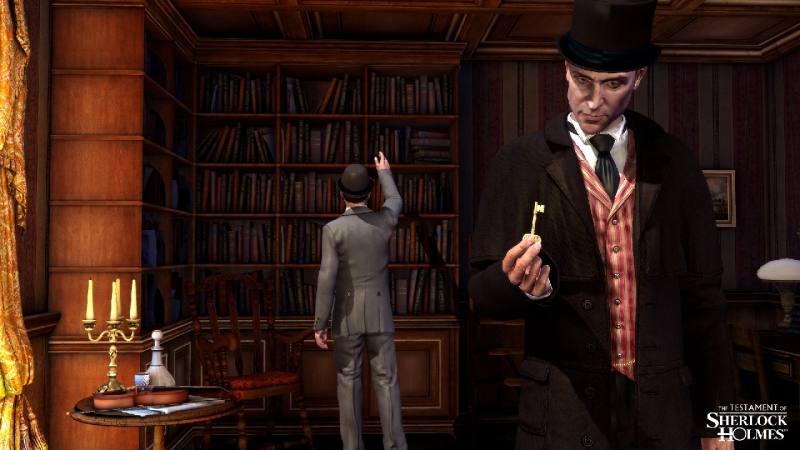 It's very easy to dismiss Frogwares' Sherlock Holmes adventure game series if you only look at screenshots. They aren't the most beautiful games around, but what they lack in appearance they more than make up for in depth. The latest title in the series, The Testament of Sherlock Holmes, launches September 25, giving you approximately two days to familiarize yourself with the series. That's if you're willing to take the Sherlock challenge….

Did you know that Sherlock not only battled Jack the Ripper but also took on a Cthulhu cult? For a mere $34, you can pick up all six of the currently released Sherlock games on Steam. I admit that not every entry in the series is brilliant, but I can guarantee you won't find a more rewardingly challenging adventure franchise this side of Gabriel Knight.

If you're interested, why not see how many of these recommendations you can finish before September 25.

Sherlock Holmes: The Awakened
This is probably my favorite game in the series. The release incorporated elements from H.P. Lovecraft's Cthulu mythos, making it a departure from more-traditional adventures. Sherlock stumbles across a vast conspiracy full of ritualistic sacrifices and horrific mental institutions. The detective even makes a trip to New Orleans in an effort to track down the madman behind a dangerous cult.

This game is notable because it pushed Frogwares to step outside its comfort zone and develop an eerie, three-dimensional world. The result is an uncomfortable descent into madness that I enjoy playing through at least once a year.

Sherlock Holmes vs. Jack the Ripper
Many writers have tried their hand at placing Sherlock Holmes in the Ripper investigations. It works most of the time because so many aspects of that case remain unexplained despite historians spending years scouring for new clues.

This game flirts with many controversial topics, like a gay doctor who tries to shock men into homosexuality by showing them his collection of uteri.

Is this the most believable Jack the Ripper case? No, but it is a bloody, moody look into Victorian criminal investigations. Sherlock also puts Watson in very uncomfortable situations by asking him to assist in recreating iconic crime scenes.

This was also the first game released on home consoles. So, if you want a relatively easy 1000 achievement points, track down a copy of Sherlock Holmes vs. Jack the Ripper on the Xbox 360.

Sherlock Holmes: Nemesis
In this adventure, Sherlock matches wits with French master criminal Arsène Lupin. Maurice Leblanc, the author who created Lupin, was actually a contemporary of Arthur Conan-Doyle, and his books enjoy a similar popularity in Europe.

Nemesis was the first game in the series to introduce a criminal always moving one step ahead of Sherlock, a theme continued in Jack the Ripper. This is by far the least polished of the three games I'm recommending, but Frogwares did an excellent job throwing two legendary 19th century characters into one plot.

This game also has my favorite unintentional Slender Man-esque moment. The developers didn't give Watson a walking animation, so he just teleports around as Sherlock investigates. The result is pretty creepy.