Wrapped up Gravity Rush this afternoon and while not perfect, the game reminds me how nice it is to experience something different.  The gravity-shifting mechanic created a vertical dimensionality to the play space that was parts disorienting, creative, and, ultimately, exhilirating. 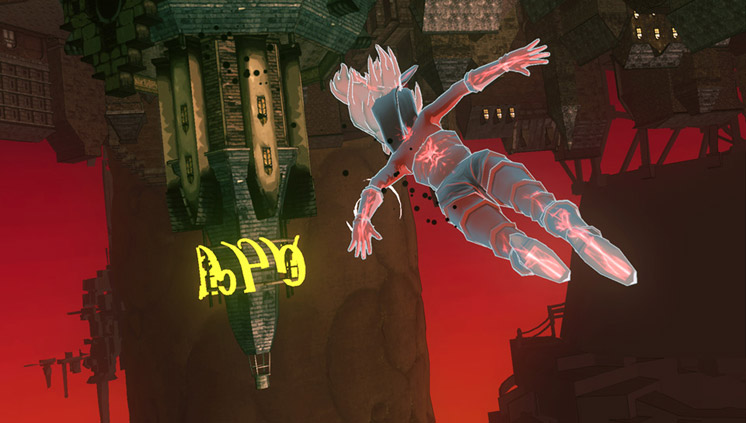 I had controls set up where the R-button would cause Kat to float.  A little focusing reticle appears on the screeen and the right analog stick adjusts the camera view.  A second push on the R-button and Kat "falls" towards the target.  Aiming the reticle and hitting square-button results in a "gravity kick."

There was something that was just terribly satisfying falling about, whether in battle or even just traversing through town.  Navigational points easily helped me move up and about, upside down as was sometimes necessary.  The mapped areas, though not huge, were big enough to get lost in and knowing where to go became more of a fun activity than tedious.  It kept the game moving mission by mission though there are a number of optional challenges available as well.

The combat using the gravity-shift was tricky.  Controls were not spot on and evasiveness, the player's only defense, could be problematic and inconsistent.  Often times, victory rested more upon deployment of special ability than anything, especially for the bigger enemies.  But combat never got so frustrating as to warrant giving up or not coming back.  Save points were generous, including mid-boss battle checks.  What kept my interest was the great feel of a successful attack and ultimate vanquishing of the foe.  Targeting required quite a bit of manuevering but when sighted properly and executed, attacks caused a resounding crash on the opponent, conveyed artfully by audio cues as much as visual.

I enjoyed the game quite a bit and that it was on the Vita was a nice bonus.  I think the game would play well on other systems too.  I don't know that the Vita features including use of the tilt sensors (didn't really use often) or touch gameplay were so vital to my enjoyment.  They did not detract nor feel tacked on which is a bonus.  Certainly, the dual analog sticks play a significant factor in control.

I think where the Vita excelled versus what a full console counterpart could offer was the way in which proximity to the Vita's screen led to a view that essentially filled my field of vision.  The more direct connection between player and game created a feeling of control, physical or perceived, in moving the screen in sync with the action — where even though motion controls weren't activated, there was a visceral feeling of gravity conveyed through the game and gameplay that made it a truly unique experience.

Definitely we need more games like this… not just for the Vita but for all systems.