What character does this quote remind you of, "Hey! Listen!"? 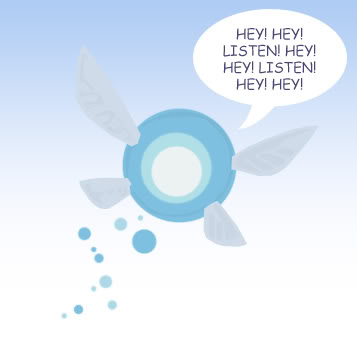 The quote comes from Navi, the annoying fairy in Legend of Zelda: Ocarina of Time on the Nintendo 64.  She constantly tells the player where to go, or scold them for exploring for too long in an exploration-based action/adventure game.

The reason why Navi exists is to serve as a hook to keep the player going in the right direction.  Her entire function in the game is to lead the player towards the cool stuff in the game.

Yet Navi's motivations conflict with the player that wants to get a few more rupees, or hunt down some heart containers.

Navi's existence points out a flaw in video games, which is most of them have little clue on how to motivate players.  They resort to side-kicks like Navi or just give a floating arrow in BioShock to lead us toward a direction.  Games need to lead players in these directions as that is where the cool stuff is, but not every player is interested in going this direction.

How can you keep players interested in your game, if you don't give them a reason to follow your hand?

A video game is similar to a Dungeons & Dragons campaign.  Most sessions session will have a linear dungeon filled with role play encounters, combat, and 100 pound diamonds to steal from dragons.  Like these campaigns, video games need to give the players a 'hook' to go in this direction, and this is where they stumble in most cases.

Brandon Guerrie gives some good examples of this in modern video games.  Most developers seem to be forgetting the 'hook' or use of a carrot on a stick to lure gamers in the direction they want.  Instead, they just opt for mini-maps, beacons, or navigation pointers telling us to go here.

However Guerrie's thesis establishes what his hook is:  Exploration.  I assume Guerrie, like me when I play BioShock or Elder Scrolls V: Skyrim, enjoys going off from the main story to explore the levels.  These games do that, and they do reward you for going off to look around.

In my case when I play Skyrim I'm looking for spell tomes or enchanted gear to reduce my spell cost for my Argonian mage.  I enjoy powering up my character through exploration, which could come from a different direction than what my compass indicates.

The problem here is that games don't give us incentives to move through these levels in the way the developer imagines.  We should follow this annoying fairy because she is our tour guide to a Zelda world.  We should rescue Princess Peach again because that is Mario's only motivation.  Each game recycles the same hook that it gets dull, so we wander off elsewhere in the game-world to find something new.

The best hook is one that motivates a player in the direction the developer wants.  These hooks have meaning to the gamer, from seeking revenge to power.

With Dungeons & Dragons, this is easy to do since the player is right there and they can give the motivation factor to the Dungeon Master (DM).  These motivation hooks are the golden hooks for the DM to use in their game.

When it comes to video games, developers don't have this opportunity to learn what motivates the player.  Bethesda doesn't know what I'm interested to do in an Elder Scrolls game, but they do provide enough content that I'm satisfied enough.  This works fine for an RPG or Sandbox game, but it might not work for Zelda games.

However there is a simple hook to use for getting a gamer motivated:  Steal from them.  Seriously, this trick works amazingly well in Dungeons & Dragons that it will motivate players to hunt down worthless goblins just for boots!  Most games give us the feeling of being powerful through RPG mechanics or defeating powerful bosses, then rewarding material rewards to us.  Imagine if there was some dick stole our gear from us?

Castlevania: Symphony of the Night shows this motivation very well.  As soon as the gamer start as Alucard, they feel like a bad-ass with their gear.  The player has high defense and delivers massive damage with a flaming sword.  How cool is that? 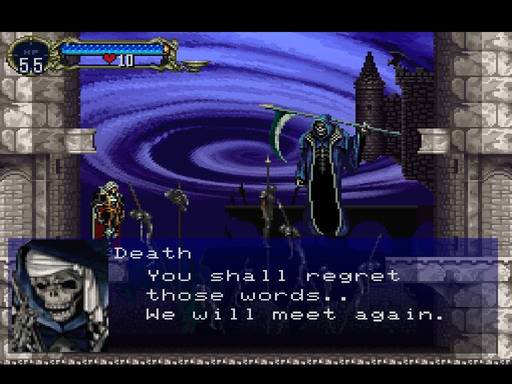 Until Death, Dracula's servant, comes around and steals that gear from the player.  The player is still Alucard and his motivations are still the same as before (kill Dracula), but now that player has another motivation:  Get back your gear!

This takes quite a long time for the player to do, as Death is one of the last bosses in the opposite castle.  This leads the player through enemies that are of similar level, but still hard as they are only punching the monsters with their fists.  It's a slow process, but eventually the player confronts Death to accomplish the quest they set out in the beginning.

Game designers may not be able to predict what motivates a player to their game.  This leads to making characters like Navi to guide us.  But instead of making that obnoxious tinker-bell, why not try implementing ways to get the player interested?  Stealing could work, and there should be other methods so experiment!

Unless you enjoy making characters like Navi to guide players.