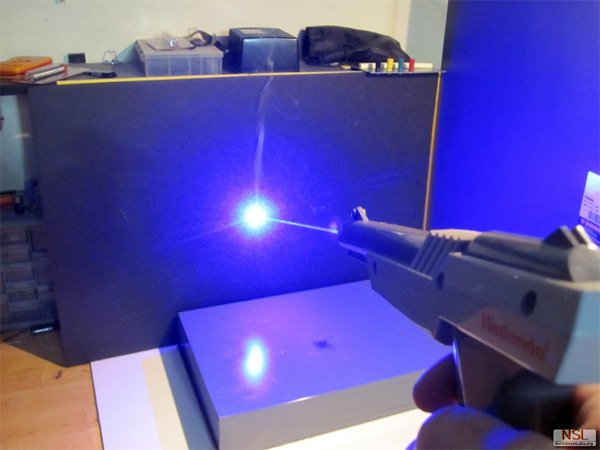 Thanks to technological advancements and society's great need for high-definition televisions, you can't use old school light guns anymore.

Since the world now has a bunch of useless Nintendo Zappers, it only makes sense that people would mod them to shoot lasers. The dangerous minds at North Street Labs took the idea one step further by building a laser that can set matches on fire [via Engaget]:

Now for the boring science lesson: The reason the Zapper and other light guns won't work on your fancy TV is that its targeting system depends on light emitted from tube televsions. When you shoot in Duck Hunt, the clang you here is actually the gun opening up to let light hit a photodiode that converts the signal from the screen into a current fed back to the computer, or in this case, the Nintendo Entertainment System.

Newer televisions don't rely on cathode tubes to work and cannot project the initial signal that older light guns need to read. That's why newer guns either come with a proprietary sensor or are compatible with the PlayStation Eye or Kinect cameras. Modern accesories actually emit a signal that sensors pick up, rather than converting light on a screen into a current.

So, that's why you can't play Duck Hunt — or any old light gun game — on a flatscreen. That means you're free to turn all your old controllers into lasers!