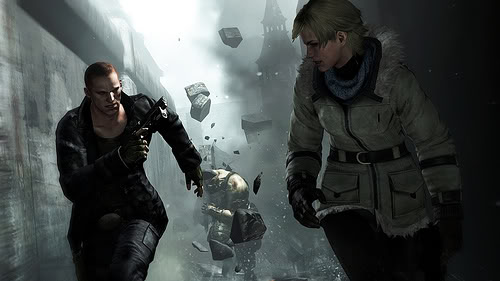 Capcom seems interested in experimenting with asynchronous multi-player lately.  Asynchronous multi-player games let players interact through parallel game-sessions, like play-by-email games.  Capcom used this in their action RPG Dragon's Dogma pawn system, where you pimp out your minion to other players so they can come back with nice loot for you.  A similar mechanic seems to exist in Resident Evil 6 with 'REnet', which is meant to keep players engaged in the zombie-packed game.

In a interview with Resident Evil 6 producer Eiichiro Sasaki, he states that with REnet it will help keep all gamers connected and determined to complete the game.  "One of the basic elements is you’re going to be able to check in on your friends’ progress and see how they’re progressing," says Sasaki.  "Conversely they’ll do the same with you, so it will be a challenge for both of you to see how far you can get, and see who is doing better."

I'm reminded of old arcade games with a high score system using this method.  If a player did well at an arcade and got on the high score, other players might try competing at that score to get on the score list.  When a player comes back the next day and see that their friend(s) has got a higher score, maybe they want to get a higher score in the game, which encourages replay value.

However I don't think this would work, considering the mixed opinions on Resident Evil 6.  Based upon what I heard the experience in Resident Evil 6 sounds bland and forgettable, riddled with quick-time events in a generic shooter.  Maybe if this was implemented in a better single-player game like Elder Scrolls V: Skyrim, it could serve as a good 'hook' to keep players engaged.  But if a player is losing their will to play a game due to the content, chances are any 'motivation' from their friend's performance won't motivate them.