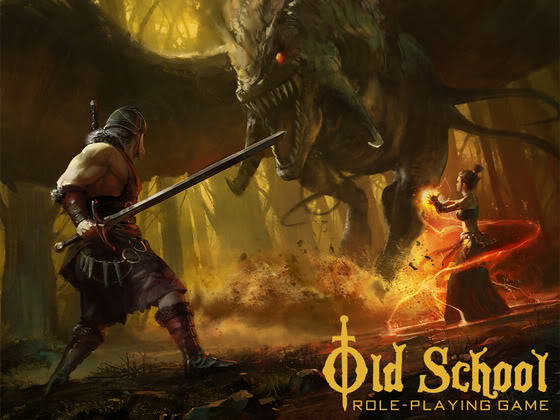 Kickstarter has become a nesting ground for old, but loved, video games of the past to get sequels or a second chance.  One genre that I feel has died out is the Role-Playing Game genre – which might come as a shock to most of you since Witcher 2 and Dragon Age: Origins are seen as great RPGs, which they are.  But I'm talking about the classic, non-action based RPGs, which seems to be lacking in the 21st century.  The people at Loot Drop seem to have similar thoughts, and just now launched Old School RPG on Kickstarter.

Two designers will be working on Old School RPG.  Brenda Brathwaite started with the Wizardry series and moved on to Dungeons & Dragons.  Tom Hall designed some games outside of RPGs, like DOOM and Commander Keen, but he also has Anachronox on his resume.

Like other Kickstarter games, there isn't any screenshots showing the game off.  What's known so far is there will be four characters you can make from rolling or other character creation methods, similar to Wizardry.  Each character will have their own strengths and weaknesses that need to balance themselves out.  Other features like exploration and alignment will be promised, yet what has me intrigued is the return of first-person, turn-based combat.

Brathwaite and Hall promise some extra features to the game if they go beyond their required funding.  Reaching a million dollars lets players 'unlock' the game, as if it was some kind of achievement.  However if the game reaches 1.9 million dollars, two RPGs will be made that will be designed separately by Brathwaite and Hall.  Each game will lead into the next one, with characters, choices, and one of multiple endings influencing the other.

I would love to see a classic turn-based RPG being made, but anyone should approach these Kickstarter-funded games with caution.  The comment on "You have unlocked the game!" could imply Loot Drop is giving it to us like an achievement, like we have to earn it.  However, I do think games like Wizardry 8 would be great to have along with our action RPG hybrids.  The Kickstarter for Old School RPG ends early November so there might be more information revealed.