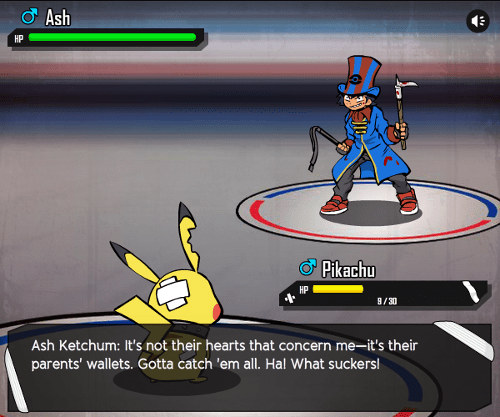 Pokemon is a game that is very easy to compare to animal abuse cases.  Ignoring the debacle of sending children away from their parents to help a professor document wild animals; these children catch powerful, organic weapons that can warp time and space, but are used to fight against other powerful creatures.  Apparently the People for the Ethical Treatment of Animals (PETA) finally decided to make their own flash game spoofing Pokemon, where Pikachu and other creatures try to get away from their abusive masters.

"Pokemon Black and Blue" lets you engage in battles similar to the turn-based RPG of Pokemon.  However Pikachu and others will be fighting against their trainers to gain freedom.  With each trainer defeated, Pikachu is joined up by another pokemon to fight for the rights every Pokemon deserves.  Also along the way, you will also find disturbing videos provided by PETA supporting their case on how animals are poorly treated (Warning:  Might not be safe to watch if you care about animals).

I'll admit that Pokemon is very easy to connect to cases like dog or cock (the rooster, you perverts) fights, but I believe PETA is missing the thesis of Pokemon five seconds into Pokemon Black and Blue.  It's a game world where humans and animals work together in harmony – kind of, as there is always going to be some Team whatever to abuse them.  I remember in Pokemon: Yellow that there is some Machops used to build a building in a city.  Plus there are people always found in towns that just keep Pokemon as pets.

The game-world in Pokemon Black and Blue is so bloody and grotesque that it's comical.  Each pokemon are shown with bandages and scars on their body as a way to show off how abused they are.  All the trainers are presented with a crazy-face, with no awareness of the Pokemon's feelings.  Characters like Ash Kechum and Professor Juniper are polar opposites of their official personifications, wanting to abuse animals just so they can abuse animals like a cheap, Saturday morning cartoon villain.  Pokemon is about fighting, but also caring and fighting against Team whatever for the rights of Pokemon.  PETA's game is a world of poachers and unsympathetic humans that escaped from an insane asylum.

Plus Pikachu doesn't speak.  Only Meowth in the TV show does that.