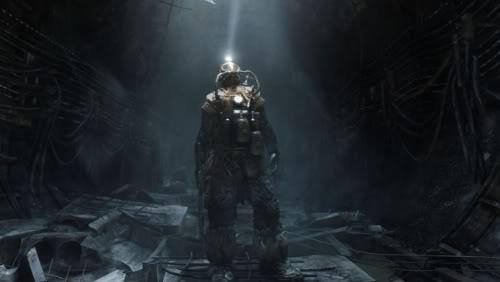 Video games are not great due to its multi-player.  Multi-player games sell well and most developers/publishers know this, so they might try adding multi-player mechanics in any way to any genre of video games, like survival horror.  But stapling some network code to games that were primarily single-player tend to harm both campaigns instead of enhance both experiences.

Some single-player, survival horror games rely on the feeling of being alone to work.  In Metro 2033 the players need to scavenge for items, usually bullets, if they wish to barter with Non-Playable Characters in the game.  If a multi-player mechanic was implemented, the items would become even more scarce, and that can be abused by griefers.  The player might not feel like they are trying to survive in a hostile environment, but being picked on by anonymous cyber-bullies.

Most video games get multi-player stapled on because they do sell multiple copies.  If a bunch of friends want to enjoy the latest installment of the Call of Duty games, then each would need their own copy.  Games are a way of socializing with friends and developers/publishers might use this in a sequel game.  Even if it is a game that doesn't use the multi-player mechanics in a survival-horror setting like Dead Space 2.

Fortunately not every developer is implementing multi-player in their games.  4A Games, developers of Metro 2033 and the upcoming Metro: Last Light game admitted on their blog that they will be putting aside the multi-player components for Metro: Last Light to focus entirely on the single-player campaign.  4A Games stated that a response to their E3 demo that the Metro series was praised more for its single-player campaign than a request to play the game online with a buddy.

Multi-player features just don't work in every game.  Maybe something like Metro: Last Light with multi-player might work like the persistent world of DayZ.  On the other hand, there are other survival-horror games that tried multi-player like an unknown drug and woke up the next day with three unknown men sleeping in their beds and a sore rear, such as Dead Space 2 and BioShock 2.