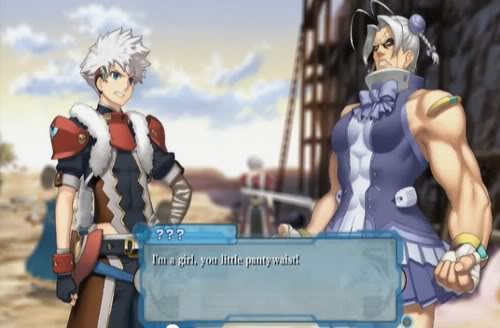 Bizarre characters like the one on the right work well in cutscenes, right?

Cutscenes in video games might be considered an obscene word by gamers.  There is plenty of evidence from action to RPG games that point out how cutscenes could ruin a game's experience.  However earlier this year I found a dungeon-crawler that showed me that cutscenes – non-interactive narrative events in video games – are just used poorly.

There are a few ways cutscenes can be done poorly, which then hurts the game.  Scenes that draw the player out of the game-world by defying logic; interrupt the flow of exploration or combat so villains can monologue; or just wasting the player's time are bad ones.

One of the worst cutscenes would be ones that interrupt the flow of a game.  You are in the middle of a battle with a villain you grew to hate through the entire campaign.  Both you, your allies and the villain are fighting with everything they got – and then the villain pulls a move out that stuns everyone long enough so the villain can monologue.  BioWare's Dragon Age II final Warrior boss fight unfortunately does this (just before 8:50).

Cutscenes that waste the players time are just as bad.  These are cutscenes that might show the characters doing something awesome with no player input.  These could be scenes where emo-fueled Vincent in Dirge of Cerberus fights off a helicopter, or 50 Cent: Blood on the Sand showing 50 Cent off in a non-interactive gun fight.

But the worst would have to be cutscenes that just ruin immersion.  These are cutscenes that do nothing in engaging the player to the game-world.  Such as using insane clothing or completely unexpected, gender-defying characters.  The opening for Ar Tonelico Quoga: Knell of Ar Ciel sums this up.

But there are times when cutscenes can enhance the story, if done right.  These can be used to give hints on what the player should do; help define a character's beliefs and interests; and just give a break to the player when they need it.  I mentioned earlier that a dungeon crawler has all this, and that game is Legend of Grimrock.  I'll be going into minor spoilers, so reader beware if you wish to play Legend of Grimrock.

Legend of Grimrock uses cutscenes as a way to explain what the player should do.  When the game starts we know that a player's four characters are prisoners of an unknown crime.  Their crimes to society are nullified once they are tossed into the dungeons of Grimrock, since it is meant to be a death sentence.  This cutscene tells the player what they are meant to do in the dungeon, and that is to get out for freedom.

(Spoilers!) Another cutscene in Legend of Grimrock explains the motivations of a specific character:  The Undying One.  This entity seeks freedom, like the players and their characters, so it helps them with some puzzles in the game.  However, as the game progresses we know The Undying One is tricky, unstable, and evil through cutscenes.

There are plenty examples of cutscenes being used poorly, yet there are some games that get them right.  Cutscenes are a tool used to build a game, similar to RPG and action mechanics to support the game's theme.  I was not expecting the cutscenes in Legend of Grimrock to be as engaging and beneficial to the game, but I'm happy to sit back and watch them.