It’s every fighting-game player’s worst nightmare. Online hecklers trash those who suffer it. People don’t enter tournaments for fear of it: getting mauled in a tournament stream with thousands of your peers watching you online. It’s the virtual version of being tarred and feathered. And I felt the pain firsthand.

In 2011, I stood outside of a crowd of people in a now-defunct arcade in Orlando, Florida, waiting to hear who my first opponent would be in the Super Street Fighter IV: Suffix-Less Edition competition.

Matches would be streamed live on a raised platform with the event’s largest TV. One guy wearing a replica of demon karate man Akuma’s beaded necklace told me how exciting it would be to play on that platform. I told him that that environment creates more pressure.

The organizer announced matchup after matchup until he called my name … and that my match would be on the stream.

I called my friend. I had driven for two hours to the event by myself, and if I had to play in front of a virtual audience, I might as well tell someone. I did well in casual matches beforehand, but then I thought of something else: Streams rarely show matches that don’t involve well-known players.

I went on the raised platform where my opponent was already waiting. After a minute of rearranging the button layout of our arcade sticks — prolonged when I accidentally went to the character-select screen before he was finished — we started our match: my Italian fortune teller Rose verses his Akuma.

Akuma threw a fireball as soon as the match started. I blocked. He threw his three-hit fireball. I chucked my own projectile but still got hit. I jumped in, and he countered. I ate a combo. I slid into his next fireball. I ended up in the corner and got knocked out without even touching him. Perfected. Bodied. Peed on.

The next round followed a similar pattern. Aside from one combo I fell at the mercy of Akuma’s infamous “vortex,” where he uses his large repertoire of Demon Flip attacks to create a giant guessing game for his prey. Rose happens to have Soul Satellite, an Ultra Combo that in this version forces the opponent to back off, but all I did was block and die. The Akuma player stunned me and  finished me off with a Raging Demon for style points.

I rushed right into the second match of the set without thinking of a strategy. This time I actually knocked Akuma down to 25% health, but in my mind I was still a mess. The final round was a slightly less awful version of the first two rounds. I am what my performance showed I was: trash. I don't think footage of the match exists anymore, so here is a reenactment:

After the match, I shook the victor’s hand and scurried away. I called my friend again and asked if it was as bad as I thought it was. He told me in an inappropriate manner that my opponent destroyed me, that I never used Rose's Soul Reflect to bounce back projectiles, and that the commentators said my adversary is the best Akuma in Tampa, one of the state's strongest regions. He finished sixth overall.

I spent the next half hour wandering around the arcade, trying to clear my mind. A tournament isn’t like Xbox Live where you can jump to the next match and forget the last. Eventually, I talked with another Akuma player I fought in warm-ups. We both lost our first match, but while I was a wreck, he was practically a sage. He told me that in defense I must remember that I also have an offense, which comforted me.

My first match in the losers’ bracket was against that same player. We fought a close set where I won 2-1, and he was nice to me even after I muttered, “See, I can beat Akuma” on my first win. I am not the model competitor I wish I was. We talked after the match, and he was just like me, a small-town player who wanted to fight stronger opponents. I never saw him again, but I always remembered that advice he gave me.

I lost my next round, which eliminated me from the tournament. My opponent gave me advice on how to improve my game. No one at the event ridiculed me for my performance, and when I watched the footage later on, the commentary was critical but not as disparaging as the one that ran in my head during the match. The fighting-game scene does have issues that can't be ignored, but most of the people who actually attend these events are neither the snobbish stop-having-fun stereotypes nor the peanut gallery of "stream monsters" that troll tournament chat rooms.

After the event, I immediately wanted to go to another competition and prove that I was better than I showed. Originally, this article was going to be the beginning of a "Game Diary" that led to the SSFIV: Arcade Edition tournament at Community Effort Orlando 2011, the state's largest venue. The only problem was that I had the same one-and-done result, which is a bit anti-climatic. Early outs has been the theme of my competitive career, though, my skills have gotten sharper over time, and I'm getting more wins than before. Now I at least know exactly what stupid thing I've done that cost me the match, and entering these fights is much more rewarding than playing random people online. 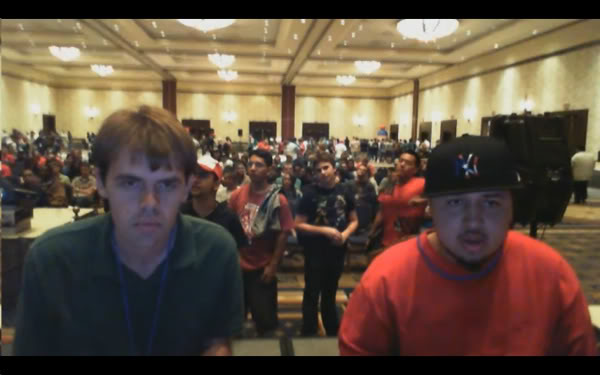 So far, I haven't appeared on an Street Fighter stream since. I did play as a random nobody again at the CEO 2011 Marvel Vs. Capcom 3 team tournament (pictured above), but I did not like the game at all during that time and only entered to battle with my friends. Had I won my second match in the CEO 2012 SSFIV event, I would have faced Canadian Ryu player Air on the big stage, but I completely panicked at the last moments of the final round and lost that chance.

With so many fighting games demanding coverage today and so many big-name players traveling to each event, the odds of a "killer" squashing an untested rookie onscreen are probably smaller than before. But it's nothing to be ashamed of as even veterans can blow it when that kind of pressure is put on them.

I do still get a chill, however, when I hear my name and an Internet stream is involved.