I teach a freshman-level composition course at a state university in Georgia as part of fulfilling my graduate assistantship. The focus of this course is primarily rhetoric.

There was a day on the syllabus calendar this semester I intentionally left blank because it was the day one of my students' term papers was due. I decided I would come up with a relatively easy activity that wouldn’t overtax their poor brains. They had, after all, been writing about David Foster Wallace's famous commencement speech. (I'm both merciful and cruel like that.)

It wasn’t until two days before "lax day" that I decided what I was going to do, and it had started out as a joke with a colleague. He was a fellow gamer who I had just introduced to the delightfully hilarious package of meta-jokes known as The Stanley Parable.

The Stanley Parable is a Half-Life 2 mod created by Davey Wreden. It concerns the journey of an employee in a claustrophobic office building that strikes a creepy balance between Orwellian and The Overlook Motel from The Shining.

The game itself is more of a choose-your-own-adventure digital short story than a conventional video game. There are no weapons or baddies to fight. There's only you (Stanley), a maze of corridors, rooms, dimly lit basements, and the god-like narrator (voiced by Kevan Brighting).

The game opens with a brief narration detailing Stanley's existence as a submissive cubicle monkey followed by the revelation of his sudden disconnect from his work and realization that he is seemingly all alone, abandoned by his coworkers. The unseen narrator reveals Stanley's inner panic and then opens the door for you to go off in search of your work buddies. What you find depends on the choices you make — choices that you may not even be aware of your first playthrough.

Where other games make the fact that you have choices that affect the path of the story obvious (Mass Effect, The Walking Dead), The Stanley Parable is content to let you find out this little detail on your own. Tired of listening to the bossy narrator? Take a right instead of a left and disrupt the pompous jerk's story. Just be prepared for the consequences.

During our discussion, my colleague and I talked in great detail about the different endings we earned and the Douglas Adams-esque brand of humor. Then, as people who teach rhetoric often do, we began to talk about arguments within the game, if there were any at all. I made a joke that I should get my students to play it and help us figure out the answer.

That joke became the activity for "lax day." By the time my students took their seats, the game was ready to go. The majority of them were at least intrigued by the concept of gaming rhetoric; however, a handful were less than pleased that they had showed up for a discussion about nerdy stuff.

I asked how many of my students considered themselves gamers. About twelve hands shot up. I asked how many were PC gamers; four hands remained waving in the air. I told those four students, all male, that they would be my participants.

I showed my first student the simple controls (WASD to move, mouse to look, E to use items) and then let him loose. My group wasn't too impressed by the somewhat dull opening narration, but the pace picked up when Stanley left his office for the first time; they started — against their will, I suspect — to become intrigued by the narrator.

And then the first decision opportunity appeared before us all on the projector screen, an eerily mundane one. Student #1 entered a room with two doors before him.

"Watch out," one of my gamer students joked, "Slenderman is going to be around that corner."

The narrator told Stanley to go right. My student, disregarding the cries of his classmates, obeyed the narrator. What followed was a long list of instructions that my student followed to the letter: go up the stairs, enter the keypad combination, enter the creepy basement, discover the giant generator room. He had one last choice to make: turn the generator on or off. He decided to listen to his classmates' input this time and turned on the generator.

There's something very Lynchian about this.

The narrator's voice returned and, in a move that completely freaked out my students, he was breaking the fourth wall, admonishing Stanley/student for his decision. The narrator went on to inform my room of now-captivated students that a nuclear device had been activated within the office complex. Stanley had two minutes to live.

My student predictably rushed around the generator room in search of an exit or a puzzle that would free him as the counter ticked down and his classmates yelled at him to do this and do that.

It was all of no use, of course, and the narrator knew this, mocking poor Stanley in his final moments of life: "After all, it should make sense, right? The timer, the nuclear device, the mysterious facility — it's all here! This is a video game. Except for one thing there, hero. You've got no weapon….when you saw that timer, you just instinctively started trying to find an exit, didn't you? In fact, I bet you're still looking for a way out."

The narrator was cut off mid-sentence as the screen went black. Several of my students laughed; the others were horrified. Regardless, every single head in the room was turned toward the screen.

Student #2 went the anti-authority route and disregarded the narrator's directions almost entirely. But in an odd choice that surprised me and disappointed his classmates, he began following instructions again later, only to be zapped back to Stanley’s office by the narrator and left to rot.

Student #3's playthrough was the quickest. He followed the narrator's directions until he got to a staircase, and then, instead of climbing them, decided to traverse the descending staircase.

"It's the room from 'Saw'," one of my female students said. The basement Stanley had just waddled into did indeed look almost exactly like the torture room set-up from the popular horror franchise, sans some dismembered limbs.

The narrator managed to convince Stanley that he was insane because he didn't have any feet — one of the jabs at first-person shooter conventions — and he was listening to a little voice in his head. Stanley died from his insanity several moments later as red washed over the screen.

Game over again. The class laughed at the absurdity of it all.

Student #4 chose to go all the way to the generator room this time and turn the machine off. The generator room momentarily fell into darkness and then a light appeared. No, more than a light: a doorway leading to the outside. The student stepped through and was informed by the narrator, as he floated through the air toward the horizon, that he was free at last.

"What the hell?" student #4 uttered, clearly dissatisfied with the ending. It wasn’t a hit with his classmates either, all of whom sat in bewildered silence.

I closed out of the program and we talked about the game itself. I started out with a simple question: "What did you guys think of it?"

"Weird," one of my outspoken students said. "But cool."

The rest of my pupils nodded their heads.

"What about arguments? What did you see?"

Surely but slowly, with some prodding, they began to speak up. One of my participants put forth the notion that The Stanley Parable's argument was one concerning control.

"Good. Talk a little more about that."

"Like, we have choices, but we don't really have them, or, like they don't matter…does that make sense?"

Another student, one of those who had actually groaned when I announced it was gaming rhetoric day, said "There’s no such thing as freedom."

"Good. But what about [Student #4]'s ending? Where Stanley is free?"

"He didn't get there by free will, though," she said, wisely tapping into the reason the "happy" ending of the game is so damn unsatisfying.

"That's a good point. Stanley only becomes 'free' by listening to by the authority figure present in his life. Do you think that was the creator of the game's point? That we should obey our authority figures?"

Some of them nodded; the majority of them said no or shook their heads, rejecting the notion.

"Here’s the crazy thing," I told them. "None of you are wrong, really. I believe there's enough viable evidence here for you to make the argument that this artifact is an argument for more authority, or that our choices don't matter, or that there is no such thing as true freedom.

"And I'm sure there are other viable arguments as well, because this is a piece of virtual fiction. It's not a political advertisement telling you who to vote for, a celebrity trying to sell you something, or someone trying to convince you to join their cause through a petition or an editorial."

We proceeded to talk a little bit more about the use of the rhetorical appeals (logos, pathos, ethos) in the game to close out the class period with an emphasis on the narrator’s passive-aggressive fits. I was more than a little pleased when I dismissed them. Suddenly the day I had scheduled as "lax day" had actually become more than a source of amusement. This little activity was now the link to help my students cross over from analyzing "direct" arguments to artifacts that have tons of possible arguments within them.

And my students seem to understand the concept, too. They may not have the knowledge to analyze these murky artifacts yet, but we're taking that first step as a class now thanks to a devious little enigma by the name of The Stanley Parable. 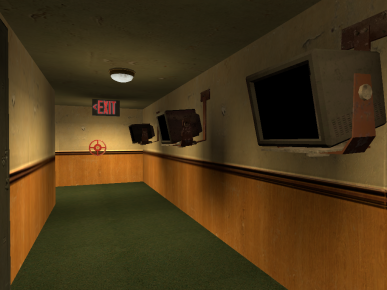 It's probably best you don't ask about the valve.

Using video games in a classroom setting isn't the status quo, but it's not exactly untraveled territory, either. I was hesitant about using one as an education device, but not because I think games aren't on par intellectually with books and movies. I simply did not want to force my interests on my students, many of whom did not define themselves as gamers.

However, in hindsight, I'm glad that I took a chance, because I think that session was successful in engaging my students, and it served as good introduction to the more confusing and daunting elements of rhetoric. It's also got me thinking about what other games instructors could use in the classroom without shoehorning them in. A playthrough of a level in BioShock when critiquing objectivism, perhaps?

Personally, I would love to have a class discussion about the "true" ending of Braid…but that would have to be for a higher-level course.

The Stanley Parable is a mod created by Davey Wreden for Half-Life 2. It can now be downloaded and played without a copy of Half-Life 2, but you must have a Steam account. You can download the game here.