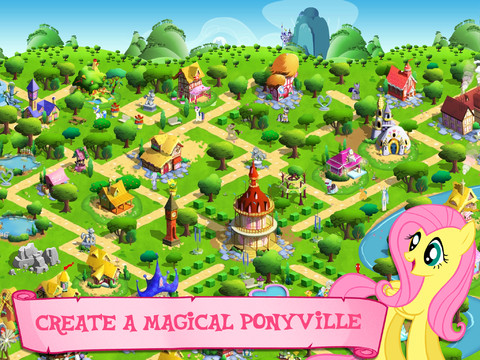 French developer Gameloft looked at the rich character depth and cheerful world in My Little Pony: Frienship is Magic and decided "Yeah, that'd be a pretty good free-to-play game." I'm not sure why I'm surprised by that decision, since pony-themed microtransactions and hordes of bronies (serious adult fans) equals infinite financial gain for both Hasbro (the company that owns MLP) and Gameloft, but I am.

The whimical Ponyville is suddenly enveloped in darkness. All the citizens flee as thier homes and livelihoods vanish into nothingness. It's up to the player to lure the characters back by rebuilding all the homes and shops featured in Hasbro's Saturday morning cartoon show.

What this means is that you'll build a shop, wait 20 minutes to collect a meager amount of in-game currency, then start the process over again as you scramble to gather enough money to purchase increasingly over-priced characters and items. Sure, you could buy more gold and even progress gems (like action items in other city-building games) but spending your money wisely is next to impossible when some unlockables cost well over $50 that way.

One of the most annoying examples is unlocking the god-like Princess Celestia. To get her, you need 950 gems, something that will take months to earn in-game or set you back $100 in microtransactions. You can buy a talking Celestia toy in virtually any toy store for less than half of that!

The key to a decent freemium title is letting players take their time and not making them over-reliant on microtansactions. I've played Friendship is Magic for the last three days and can already tell you that making progress is dependent on spending money rather than fairly allowing players to just wiat around. Trying to build an expensive house to progress a quest you've been working on for the last day? In the end, the best solution to the probelm is usually a bunch of gems.

Besides perpetually wanting you to spend money, Friendship is Magic has a rotten drop rate on items you need to peform basic tasks around town. Occasionally, especially after you buy a new plot of land, horrible bugs known as parasprites will swoop into the airea. The only way to defeat them in the mobile game is to tap them while you have the fly's corresponding collectable in your inventory.

Right now I'm stuck slowly elemenating two batches of parasprites that require a very rare collectable that I've only ever seen three of in the game. This means I can't build anything new in the parasprite-infected area until I happen across more of the necessary item.

Worse still is that some collectables require you to interact with your Gameloft Live accquintances. Since Friendship is Magic went live on Wednesday night, the friend mechanic hasn't worked at all. This means ponies and items that require you to spend "friendship hearts" are just unobtainable until further notice.

Perhaps I'm not cut out for free-to-play games, but these basic complaints seem very severe when included in a game marketed primarily at children. Sure, lots of adults love My Little Pony, and are currently playing it, but the show and its tie-in products are first and foremost for children. Including horrible wait times, untested friends lists, and near-impossible item drops just seems cruel in the long run.

At least I didn't pay for My Little Pony: Friendship is Magic, right? Oh wait, I have, I needed gems to finish a quest I couldn't complete because I had to intereact with other players to finish it….