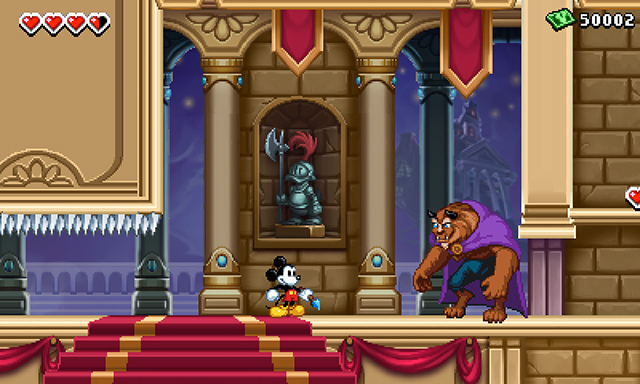 Side-scrolling dungeon exploration games still have a place in this world, and strangely, Mickey Mouse is upholding that tradition. Epic Mickey: Power of Illusion is a beautiful callback to the Sega Genesis Disney games while embracing the limited character development and exploration concepts found in post-Symphony of the Night Castlevania titles.

In Power of Illusion, the wicked witch Mizrabel has trapped iconic Disney characters in a decitful magical castle. It's up to Mickey and Jiminy Cricket to rescue all of them while thwarting Mizrabel's attempts to conquer the cartoon world. Along the way, Mickey gains new powers that allow him to paint or erase various obstacles and tackle new enemies. While the mechanics are very basic, they harken back to Nintendo DS and Game Boy Advance Castlevania games.

But its more than set dressings and similar mechanics that makes Power of Illusion a Castlevania game. In Portrait of Ruin, developers introduced a lot of missions and sidequests for players to track down. Usually, you would find a rare item when battling a monster or jump to precarious heights to pick up hidden treasure.

Using both his skills to paint items into the environment and ever-changing combat skills, Mickey can access seemingly unreachable ledges and secret areas to find items rescued Disney characters want.

Players lamenting Power of Illusion's short story probably did not fully commit themselves to the side quests plotline that will lead you through setting up Donald Duck's Uncle Scrooge with a shop, helping Goofy track down a suit of armor, and finding a frying pan for Rapunzel.

These tasks provide thoroughly unecessary insight into the lives of Disney characters outside their respective stories and are actually quite quirky. Apparently, Beast from Beauty and the Beast is not only a cursed prince but the go-to guy for signs, armor, and various enchanted goodies.

This quirky underbelly is what connects Power of Illusion to Castlevania most of all. Since Simon's Quest, the series has always dabbled in a little bit of the absurd, and being able to aid cartoon characters in seemingly pointless quests speaks to the same instinct that had gamers collecting all the furniture for an empty room in the middle of Dracula's castle in Harmony of Dissonance.

These distractions often break the tension of a game but also force players to step back and explore previous levels a little more carefully.

Epic Mickey: Power of Illusion is the spiritual successor to the side-scrolling Castlevanias I know and love, but it isn't a perfect reimagining. Mickey is a clumsy fighter, and it is far too easy to blow through a level and miss tons of not-so-hidden items simply because you killed enemies in the wrong order. But at its core, Power of Illusion captures that sense of absurdity and exploration that has long run rampant in the Castlevania series.

Power of Illusion is the Castlevania game we deserve because it forces us to look back on Konami's classic series and remember what happened before button-mashy God of War gameplay changed it. Is it perfect? Not by any means, but it keeps a very old gaming concept alive and earned a place in my heart for that.

Besides, it's really fun to try and say the word Mickeyvania.