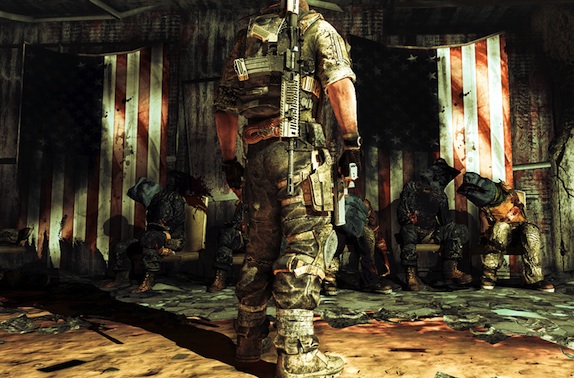 This article contains minor spoilers for Spec Ops: The Line.

Recently, a video game made me want to put down the controller and walk away. It wasn’t due to frustration or boredom either, but because I couldn’t handle its intensity.

Actually, this happened several times. I could only take about an hour or two of it in one sitting. The game was Spec Ops: The Line, and It wasn't because of the particular decisions that it forced upon me, but the overall weight of the narrative. Each battle wore me down, and eventually I would have to quit and go do something relaxing.

I enjoyed Spec Ops: The Line. The story was great and it is a refreshing title in an industry filled with cookie cutter military shooters, but the experience got me thinking about something: Is making the player walk away from the game a good thing?

The word "game" suggests that players should be having fun and enjoying their time with the product. While Spec Ops was an overall enjoyable experience, it almost crossed a line a few times. It’s a lot like a horror movie, in that you want the film to be scary enough to entertain a crowd but not so scary that it truly terrifies the viewers. I have played numerous Call of Duty campaigns in one sitting with no problem, and there is just as much slaughter in the those games as there is in Spec Ops. That means the issue is with the narrative. Spec Ops is an intense and personal story that aims to make the players question the glories of war, but it went a little too far sometimes.

Seeing rows of U.S. soldiers lined up next to a wall filled with bullet holes, or innocent civilians who were accidentally burned to ashes by your own hands, are both pretty shocking. Each gunfight leads to another scene of desperation and violence. While some people may get "combat fatigue" from shooters, Spec Ops can supply plenty of fatigue just from its immersion alone. The situations presented in the game are more than enough to make the player feel exhausted.

With budgets for triple-A titles growing more and more every year, I believe we will see more games likes Spec Ops. Titles that are extremely immersive and force players to question their actions based on actual ethics and not just arbitrary rules will become more common.

One example of how not to do this is Fable 2. There are certain actions in that game where if you choose the "good deed" you get experience points taken away from you, while if you choose the "evil deed" you keep your XP. This is an example of a decision based on a game's rules, while in Spec Ops you make decisions based on ethics. Who do you kill? The solider following orders or the criminal who is trying to feed his family? When you give game-based rewards, the decisions themselves lose their power, but if you make the player question the reality within the choices, you can reach them on a whole new level.

Spec Ops has started something amazing. Hopefully other developers will follow suit, but they need to be careful. That cannot forget that video games need to be inherently fun, and they must not cross the line into an experience that is no longer entertaining.