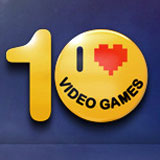 The Video Game Award's have improved significantly over the years. I mean when Samuel L. Jackson is the host and Linkin Park is performing, you're probably at the right place. The 2012 VGA's did not disappoint. I think I counted 4 awards being given out, but that's nothing compared to some of the trailers we saw. The one that sticks out the most to me is The Phantom Pain. I have no idea what the gameplay for that game will be like, but that trailer was badass. I was hoping to see a Fallout 4 announcement, but I'm happy it wasn't announced. I'd rather wait another 5 years for the next Fallout than to play another rushed game. As good as the 2012 VGA's were, there was one thing that was noticeably missing besides myself. Where was the Hall of Fame Award VGA's?

The VGA's began handing out the Hall of Fame award at last years award show. Shigeru Miyamoto graciously accepted the award on behalf of the Legend of Zelda. I remember standing up and clapping to my television as the crowd cheered for the legend himself.Mr. Miyamoto. That was the first moment where I felt like I had an opportunity as a gamer to thank Shigeru Miyamoto for his many contributions to video games. I think I shed a tear at that moment.

Not giving out the Hall of Fame Award feels like a missed opportunity. There's so many timeless classics that need to be inducted into the Video Game Hall of Fame. We don't have time to waste. Let's say the VGA's gave the Hall of Fame award out every 2 years. That'd take forever to catch up with the current generation of classic games that should be up for consideration. Maybe the VGA's could do it like the Rock and Roll Hall of Fame and required a videogame series to exist for 25 years being, but that's not what this post is about.

What I'm trying to say is the VGA's Hall of Fame Award is a big deal, and it's a shame it wasn't awarded this year. There are plenty of games and developers that deserve their moment where gamers can thank them for creating timeless art. Yes video games are art Roger Ebert. Hopefully I'll be in the audience as the Hall of Fame Award is given at the 2013 Video Game Awards. Maybe I'll be the one presenting the award. Guess we'll have to watch the VGA's next year to find out. Until next year VGA's.