I appreciate that 343 Industries has created weekly Halo 4 campaign challenges, encouraging a solo run through on Legendary. I have never completed a Halo campaign on Legendary by myself in large part because I feel like my game time can be much more productively and enjoyably spent. But between the chivos and the XP, the small bite-sized portions of campaign and the opportunity to find all terminals, I have completed the first five missions. I think it helps that I played through campaign on normal already so this Legendary play through also stands as another chance to delve into the story again. The thing is, I am starting to wonder if I'll make it. 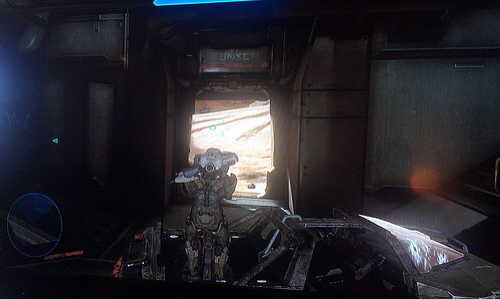 It's not so much that I mind a challenge. Heck, I have re-started some five times in XCOM under the cruelest, harshest outcomes associated with some cheap AI and the unforgiving Ironman mode. I spent a lot of time running through stages of Rayman Origins with repeated deaths and time trial runs. I have hours of calloused Guitar Hero and Rock Band play time to try to five star a song (or even just pass a finger blisterer like "Freebird").

So why am I down on the Halo 4 Legendary run? I feel like the frustration of the challenge comes from more than just gameplay but also untenable circumstances that so disadvantage the player. The end result is a complete alteration of how the game is played and the at times absurd means by which success seemingly can only be achieved.

Enemies become crack shots, overwhelm with numbers. Yet despite the increased challenge, the player is faced with overcoming the challenge with limited ammo, areas of little cover, checkpoints that can make the player wince knowing the upcoming repeat of dialogue and overwhelming odds facing him.

Survival appears only for the meek and the willing to do anything, however silly the means might be. I have found myself "juggling" weapons to move both a needler and DMR through a map. I would literally pick up and drop the weapon to move forward with both just so I had a chance to take down an Elite with something other than a used Covenant carbine. Yesterday, facing a battle of wraiths and ghosts, I positioned the warthog above such that the turret could fire at the upcoming vehicles without sustaining damage from the wraiths' cannon blasts. I have run backwards to portions that are in theory locked behind checkpoints for the random hope that ammo can e found, including a situation where I managed to find a respawning rail gun to ward off a host of Knights.

It just seems so absurd. It breaks the illusion and flow of the campaign. I don't expect a game to play as a movie, but it sure is a lot more fun when you get to feel like the action hero. Who wants to play the role of the person that uses "cheap" tactics? But if that's the only way? I guess we grind forward.