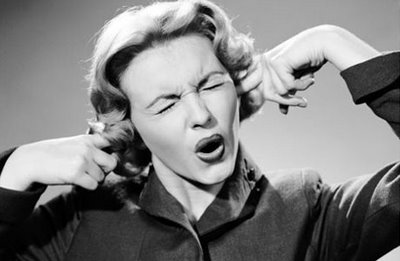 I consider it ironic whenever someone utters the query, “Isn’t it silly how so many people are against sex in games, yet violence seems to be OK?” Such a statement instantly tells me that that individual has seemingly ignored the several others whom have expressed their concern over this medium’s abundance of guns and gore.

Plenty of folks — insiders and outsiders alike — feel iffy about the act of murdering countless people in games. The problem is that they’re either boorishly lumped into the same category of conservatives who propose answers without evidence, or they’re simply ignored, entirely.

This industry has an interesting way with discussion. Not debate or opinion, as that’s quite common amongst professionals, but rather simply talking about something and regarding all different perspectives, just for the sake of potential answers. Instead, people either have resolute statements or none at all … ardent, passionate claims or nothing they deem worth saying.

And, with that, the most outspoken and revered among us fall in line with the same ignorant outside statements they oppose. Rather than reply objectively to the unsubstantiated claims that violent games cause violent behavior, they often retort with an equally closed-minded “No … Just no.” 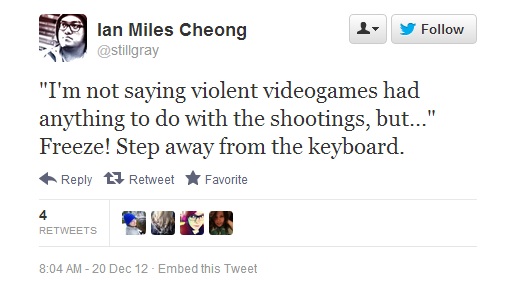 Like a roadblock, this is where things plainly stop. Not good.

To disclaim the obvious, yes, this is somewhat influenced by the recent events in Sandy Hook, and no, this is not about my personal feelings on the matter. I also will not provide my stance on the media’s implications that videogames play a role in such events. Plenty of others have thrown enough coal onto that fire.

Rather than that, this is actually about the games industry’s typical reaction to such accusations. And by “reaction,” I usually mean a lack thereof … or sometimes simple condescension.

I won’t lie, I, like most other gamers, expected a number of news outlets to link violent videogames to the aforementioned atrocity. The mainstream press can be easily analogized with fast food chains; we know what we’re going to get, no matter how bold “NEW!” appears on the menu. Unfortunately, with the same degree of clockwork, games industry representatives threw their McRib of a response into the mix.

I consider it unfortunate, only because the typical reaction from professionals is blatant dismissal. You see, when an outside entity voices its opinion that violent games might encourage harmful behavior, they make the claim without any evidence backing it up, of course. It’s said, simply because that’s the impression they get from what they see in Call of Duty and what they’ve seen Lamza do. However, when a gamer responds in the usual manner — pure denial — they too do so with a considerable lack of evidence backing up their claim, and base it more on feeling and personal observation. It doesn’t matter if they’re a mere hobbyist or a self-proclaimed “expert” on the medium, this is common with both.

Honestly, you don’t get why non-gamers would think “Oh my” after seeing this? Come on, guys.

The fact is, though no studies have shown a causal link between games and violent behavior, none have provided any proof that no link exists, either. In that sense, one can’t objectively say games don’t have the potential encourage violence, any more than one can say they do. Simply put: neither side is right or wrong … yet.

That’s not the humble impression we get from the industry, though. Gamers, journalists, developers, and marketers alike brush off any sort of claim towards the possibility that games can provoke violent behavior, as if it were complete nonsense. They fail to see that it’s not about getting them to acknowledge an absolute fact, but rather getting them to merely consider it being a possibility, especially with such a lack of evidence. And, with their reactions, these professionals outwardly advertise their ignorance and closed-mindedness.

This is saddening, because videogames are a big deal to a lot of us. It’s still a young, blossoming medium, and we want to see it reach its full potential through experimentation, as well as open discussion on its good and bad qualities. Murder is nothing positive, and, though its mere presence in fantasy may very well be harmless, one can’t call a puzzle negative if its solution is anything other than harming the person in front of you. That, unfortunately, is not what games excel at. And that, sadly enough, is the very discussion that dismissive professionals are stifling.

Violence is a big issue — one of the biggest that society will always ever face. It’s a black mark on the human condition, and, much like any individual driven to positively change their character, it takes a significant amount of self-critique to recognize and fix such faults. Sometimes, it requires addressing what you’d rather ignore, which can be downright uncomfortable and depressing … I’d know from experience. With that said, if you so callously excuse any amount of consideration for these faults, I’d argue you’re detrimental to the conversation entirely, not to mention the potential for humanity to recognize and rectify such flaws. 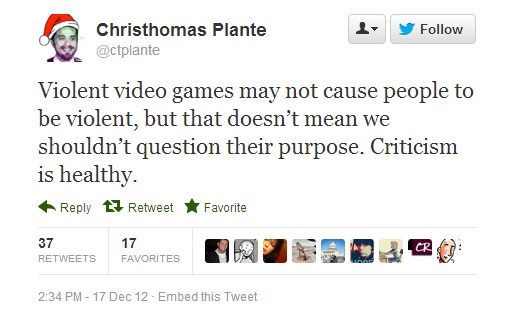 This. I’m not really familiar with this guy’s work, but he’s doing it right.

Again, you’re correct, no proof exists to implicate that games can cause violent behavior, but we have the same lack of proof to deny that claim, entirely. No good science is at either side of the debate, so the only rational course of action is to stay in the center and accept the possibility for either to be correct, and to also openly discuss anything related to it, good or bad. It’s healthy for the individual, and it’s healthy for the medium.

If you can be considered some sort of professional or figurehead in this industry, yet you’re unable to acknowledge that games could potentially have specific flaws (or you’re unwilling to, which is worse), I implore you stay out of the discussion. You only seem to get in the way of things.