After its release, I found myself getting into discussions online about whether or not Papo & Yo is a “good game.” While I’m not going to say that I convinced myself the game would be universally loved, I did believe that for the most part, people would have positive reactions to it. This has not been the case, and I found myself going on a few minirants, trying to defend my opinion about P&Y. Well, it’s the time of the year when many gamers and news sites are making their Game of the Year lists, and I’d like to take a moment to explain just why Papo & Yo is so special to me and why it deserves to be my own personal GotY.

First of all, I wish to address something all the naysayers seem to be using as ammo against this game: the IGN review. IGN gave it a 4.0 out of 10. That is not good. But the main reasons cited by the reviewer for the low score were technical issues such as framerate, screen tearing, and “game-breaking” glitches. The version of the game that IGN and most other early reviewers played was an early version that has since been patched. I never had to restart my game in either of my playthroughs because of glitches or freezing. The framerate lags and screen tearing are still present, but honestly, it’s not a deal breaker. It’s the same problem that for some reason gets overlooked or ignored in lots of triple-A, big-budget titles (take Skyrim, for example).

I also hear complaints that the puzzles are too easy or not intuitive enough. There were a few times where I felt like the puzzles were not as challenging as they could have been, but while I was playing the game, it didn’t really bother me. I was in Quico’s world — his childlike imagination. So what if the next key I had to turn or the next cog I had to push was obvious? It was still fun. Remember fun? Remember having a nonjaded gamer’s mind, when you entered new experiences without judging them against other games? Yeah, me too. 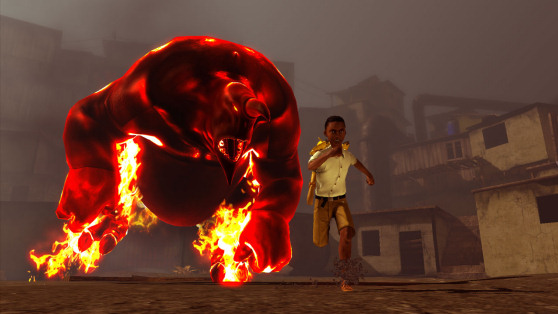 Third, some people say that the game is “pretentious.” I’m not entirely sure how. Sure, it’s doing something unprecedented in that it is something of a nonfiction game, but it does this in a quiet way. Creator Vander Caballero has said time and again that he wanted to use video games to tell his story — a story about growing up with a monster in his family. Sure, there are lots of other emotional and meaningful games out there these days. Journey comes to mind first. And sure, its metaphors may not be as heavy-handed, but P&Y is different because it’s autobiographical. I can’t remember the last time I played a game that put me in the shoes of its creator as a frightened child. Can you? P&Y is unique in that it is the first time that I, a 30-year-old gaming vet, have ever encountered a game that let me play through someone else’s — a real human being’s — childhood.

OK. There’s got to be more to this, right? Correct. This is probably the main reason why P&Y means so much to me: I grew up with a drug addict father. He is still a drug addict. There were a few moments in P&Y where I knew exactly what Quico was feeling, and it broke my heart. My relationship with my father hurt me so much as a kid that I even cried at the end of Final Fantasy X, when Tidus — with tears in his eyes — finally tells his father he hates him. So you can imagine how I felt at the end of P&Y.

This is something that not everyone playing the game is going to relate to, and that’s fine. I know that. I think Vander Caballero knows that, too. But I also think that he realizes there are people like me out there who grew up with abusive or negligent parents who will play P&Y– who will really be moved and understand that they are not alone. Is that pretentious? I don’t think that Caballero or anyone else at Minority Media ever said that they were the first to make an emotional, symbolic game. But for me, at least, the developers are the first to ever make me feel like I’m not the only person who went through his childhood afraid.

So at the end of the day, P&Y is my choice for GotY. It’s fun, full of wonder, and emotional, and it does something brave in allowing players to experience a bit of Caballero’s childhood. The music is excellent, and the visuals are something out of a dream. It is not a perfect game — there are a few frustrating moments and graphical hiccups, but they’re nothing that will sour the experience. Some may say that choosing a PlayStation Network-exclusive title for my GotY is like picking a short film to win an Oscar for Best Picture, but I disagree. P&Y’s brevity lends itself to replay value. Its length makes it feel all the more like a child’s dream. And there was not a single “triple-A,” big-budget, $60, 25-plus hour game released last year that made me feel anything like what P&Y did.

Caballero says in this diary that he just wanted to make the game to tell his story. I think he succeeded. Here’s looking forward to your next game, mate. Hopefully, more people will see the beauty in it.

One last note: The music is brilliant. Brian D’Oliveira played every instrument live during its recording. Minority Media has made the soundtrack available via the PSN store, so check it out!