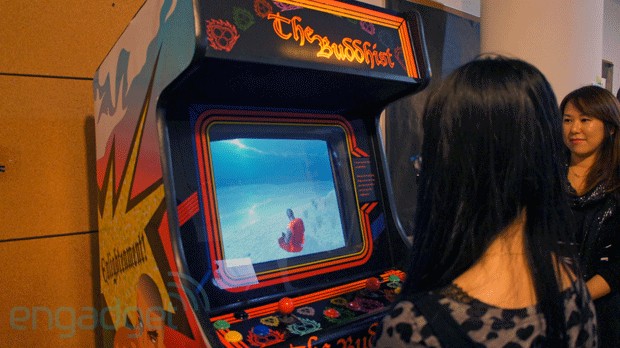 At first glance, The Buddhist certainly looks like a game. You play it on a classic arcade cabinet with a joystick and several buttons. But judging by this video, most people at the show who tried The Buddhist seemed to be confused about what they were “supposed to do.”

While some would find it difficult to classify The Buddhist as an actual video game — especially by today’s standards, in which Hollywood-style linear narrative is becoming more prevalent — not having an immediately obvious goal is something that we have begun to see more of in a few recent releases. Journey, for example, does not have a traditional story. We don’t know much about the protagonist, and we have to piece everything together ourselves. In another PlayStation Network exclusive, The Unfinished Swan, the first stage is a completely white screen devoid of color or any text to guide the player.

The Buddhist succeeds in introducing elementary Buddhist concepts by making players aware that most of us are just too goal driven to be truly happy. Sakyamuni Buddha taught that we should not attach ourselves to the past or be anxious about the future but be fully present in this moment. Players with no knowledge of Buddhist teachings would likely keep tapping buttons and trying to move the monk avatar. As seen in the video, these attempts end in a “game over, try again” message.

The first time I played both Journey and The Unfinished Swan, I was overcome not by an urge to figure out what I was supposed to do but instead with a feeling of wonder. I took my time and explored; I enjoyed the music and the scenery; I figured out the controls and had a blast doing it.

Experiments like The Buddhist and lauded indie titles like Journey and The Unfinished Swan show that interactive media can also be tools for teaching players about their expectations and preconceived notions. Several reviewers have compared Journey to a religious experience, and if that has set any kind of precedent, I think we can expect to see more games that make players question their reactions, expectations, and values.