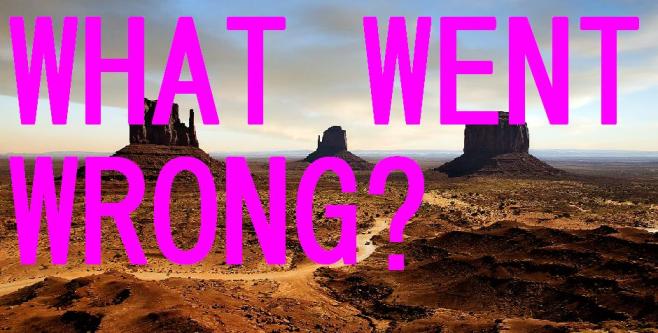 The steampunk shooter Damnation was met with unanimous derision upon its release in 2009 and then disappeared, going out as one of the worst critically received games for a decade.

The product of first-time developer Blue Omega Entertainment, Damnation was to be a revolutionary combination of fast and hard gunplay, vehicular combat and traversal, and a sprawling, organic level design. Its story would sidestep clichés by reimagining the American Civil War as a conflict driven by steam, not gunpowder — where airships, mechs, and giant tanks were common sights. History and fantasy would collide in a maelstrom of bullets, acrobatics, and heroism, resulting in a game quite unlike anything that had come before it.

The team realized almost everything it set out to achieve though often in only the most tenuous of ways. The game was universally criticized as being awkward and stilted, visually bland, incoherent, and half-finished. I spoke to lead designer Jacob Minkoff to discover why Damnation showed so much promise but failed to deliver on all but the most basic levels.

“Games are, I firmly believe, the hardest possible type of media one can work in,” Minkoff told me on a cold November morning. “There’s a formula to making a good story, and every time you watch a film, it plays out the same way. But there is no formula to making fun.”

Indeed, even the most linear of games are a collection of systems that all play important roles, where the failures of one often hinder the others. Damnation was not meant to be a simple linear game, though. Jacob’s design documents peg it as the “next step in the evolution of the shooter.” Damnation was intended to be something very special.

The game germinated from a hybrid first/third-person action game entered into the first Make Something Unreal competition in 2004. While it didn’t win, production continued with a full retail release as the ultimate goal. Aspirations were high among the team, and its plans for the game were lofty. Its ace up the sleeve was to be its gigantic levels. Rather than follow generally accepted design conventions and create locales from smaller, more self-contained segments, the team wanted Damnation’s locations to be huge and open so that players could clearly see where they had come from and where they were headed. Claims that the player would be able to see “three hours of gameplay stretching out before and behind them” are astounding in their audacity, especially at a time when shooters were still dragging players through courtyards connected by hallways and corridors.

“Before and behind” didn’t just mean horizontally, either, as many of Damnation’s locations would also open up vertical space to the player. Buildings and terrain were to be more than window dressings; they were important tactical tools that the innovative player could use to his advantage. A rooftop could provide the perfect vantage point for players until the advanced enemy A.I. spotted them and began flanking maneuvers. Suddenly, this advantage would become nothing more than a place of momentary respite until the player was forced to run for his life, leaping through gunfire to an adjacent window, across the fifth floor of a building, and then down to the street via a flagpole.

Blue Omega was aiming high with Damnation. It wanted to create huge battlefields that player and adversary alike could traverse any way they saw fit. It was seeking to create both organic locations and enemies, throw the player into the mix, and watch the emergent gameplay spiral out of control in the most fantastic of ways. Things eventually did spiral, though no one, especially the player, benefited in the least. 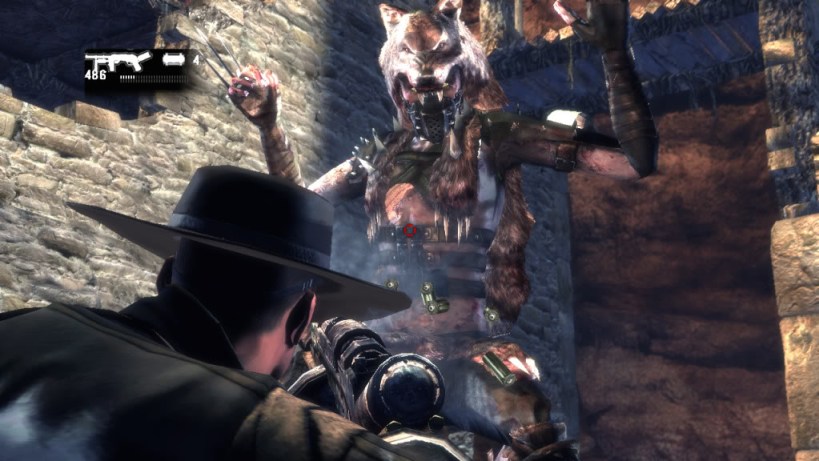 “When we started, we just didn’t consider the possibility that we could fail,” said Minkoff, rationalizing his team’s high expectations. “Please note that I say that with a certain amount of pride. There is no room for self doubt in the creation of any great work.”

He does, however, concede that “Damnation was a product of a green team that didn’t really know what they were doing. It was my first professional game development project; the same was true of many members of the core team.”

It seems that Blue Omega’s hefty aspirations, some of which bordered on the ridiculous, were born out of inexperience rather than any tested and proven knowledge. With this in mind, sound bites like “hundreds of animation per character” and “the most detailed A.I. routines yet seen” cease sounding like possibly attainable goals and become hyperbolic and fantastical.

The eagerness of the team also led them to overlook the huge challenge set by the new console hardware they were developing for. “We were on the cusp of a new generation, and we learned lessons that have since become common knowledge in game development,” said Minkoff.

In trying to expand upon Damnation so dramatically while working with new hardware, Blue Omega tried to accomplish too much too soon. “Making a sprawling — theoretically — triple-A game on console and PC was simply too much for us to handle,” said Minkoff.

This problem was only exacerbated by the decision to outsource large portions of the game and maintain an uncommonly small in-house team. The strategy was originally intended to afford this core team the greatest level of flexibility and allow it to adapt throughout development. As Minkoff revealed, this simply was not the case in practice.

“Outsourcing was a problem,” he said. “You need the time, experience, and budget to turn on a dime — to throw out what you’ve made and try something else quickly, and within constraints. We did not have the resources or knowledge to do that at Blue Omega.”

This inflexibility, caused by inexperience and outsourcing, led to the game’s woefully protracted development cycle. Few games command four years to make, and when they do finally see release, it’s usually justified with high levels of polish and production value. This was the opposite for Damnation. The longer it stayed in development, the more out of touch and less impressive it became. Level architecture, A.I., textures, animations, movement, physics, audio mixing, sound effects, dialogue, cutscenes, acting, weapons, and general common sense all had their merits eroded over the years it took Damnation to gestate.

“The most detailed A.I. routines yet seen” devolved into enemies standing in place until the player came within twenty feet and activated them. Considering levels were hundreds of feet long, wide, and often high, this left a huge margin for error. Entire enemy encounters could be circumvented with only a sniper rifle and steady aim as foes were picked off one at a time, all elements of challenge, tension, or believability falling away to reveal Damnation’s hollow interior. This is not simply me being cruel — every mechanic, design decision, and art asset suffers the same terrible, crushing, worst-case-scenario fate. Nothing holds up as it should. 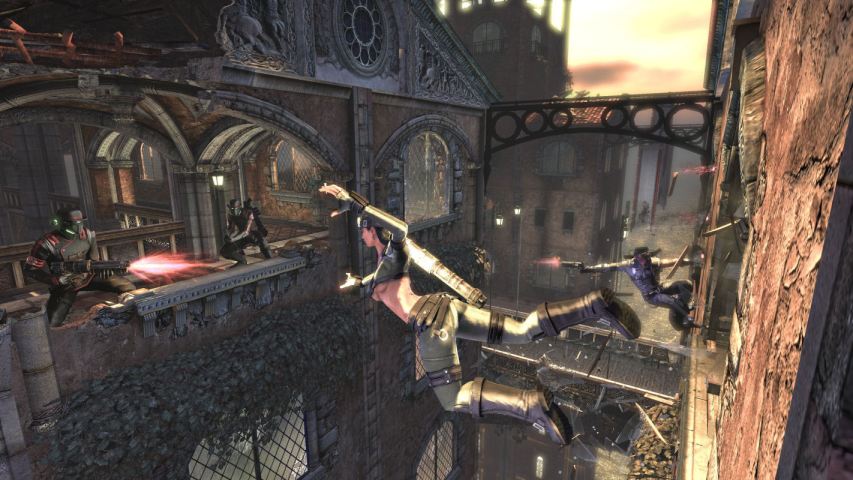 While the game showed so much promise and its team so much enthusiasm, its ultimate downfall was to be sealed by forces that cared little for either. “In the end, you usually run out of time or money,” said Minkoff. “With Damnation, we ran out of both. One of the primary reasons why you see so much architectural reuse is because it was cheaper to pay for a retexture than all new geometry. It also took less time to do so, giving us more hope of us meeting our release date.”

I find it terribly sad that Damnation was a failure. The aspirations of the team were noble and can still be seen peeking through the murk at times. While far from the organic lived-in locations they were intended to be, the levels are still undeniably impressive. Towering cliffs, precarious buildings, and death-defying leaps all do exist; they are simply not attractive, inspiring, or mechanically fluid enough to be awe-inspiring. The A.I. is terrible though it sometimes shows hints of how good the game could have been had the enemies been more intelligent. The aforementioned architecture reuse really hurts what could have been strikingly diverse locations, but the game is still varied enough to be bearable.

That is what I find so frustrating with Damnation. It could have been a great game had the team been more experienced, focused, and time-efficient. Minkoff sees the silver lining: “Many games never ship at all because the investment to make the game simply pass console certification would be prohibitive. That it shipped at all is a triumph for Damnation’s team.”

His positivity likely emanates from where Damnation took him next and where he was able to take its fundamental concepts. After the game’s completion, Minkoff moved to Naughty Dog and designed some of the most memorable sections of the Uncharted sequels. There, he was finally able to realize his ambitions for Damnation thanks to an experienced team and appropriate resources.

That the similar yet vastly superior first Uncharted game was in development at the same time as Damnation and saw release two years earlier to critical acclaim is an irony that is not lost on Minkoff. Instead of wallowing in the past, however, he is looking toward the future and building upon his first game’s auspicious past.

“Everyone has to learn somewhere,” he said. “I learned on Damnation.”