“The world of Cyberpunk is a violent, dangerous place, filled with people who’d love to rip your arm off and eat it. The traditional concepts of good and evil are replaced by the values of expedience — you do what you have to do to survive. If you can do some good along the way, great. But don’t count on it.” – excerpt from View from the Edge: The Cyberpunk Handbook, Cyberpunk: The Role Playing Game of the Dark Future

Mike Pondsmith and his crew on R. Talsorian Games’ pen-and-paper (PnP) role-playing game Cyberpunk pulled few punches welcoming would-be Solos and Rockerboys. That’s going to be a shared sentiment with the talent behind The Witcher video game series working on an adaptation of the tabletop game, which took a little over two decades to realize.

Cyberpunk 2077’s teaser doesn’t reveal a lot about the world that the developers are working on or the story — even with the screamsheet promo. Just what exactly is Cyberpunk going to be all about? What can players who have never heard of the original PnP game expect? There’s quite a bit of anticipation that it’s going to be like Eidos’s Deus Ex: Human Revolution, Electronic Arts’ Syndicate reboot, or a Shadowrun derivative.

Above: The first edition came in a big, cardboard box with B&W books that might have been printed in someone’s basement, which added a kind of low-tech edginess to the whole thing.

But Cyberpunk’s roots are more old-fashioned than that.

It still has grit in its manicured teeth, stubble on its scarred chin, and enlarged eyes on your significant other. And it’s itching to claw your face off with retractable, chrome-plated finger blades it took from a wage slave the night before because you didn’t buy it a shot at the dive where you met. It lives in a neighborhood where ripperdocs discreetly install wetware in their kitchen if you don’t have the cash for the fancy digs at the local hospital. Ronin and samurai are also checking things out, roaming the back alleys and bars at the behest of their employers while the nearest posergang, dressed in the latest duds, eye the faces looking back at them from their mirrorshades.

The 1988 tabletop game from R. Talsorian Games attempted to distill the essence of what cyberpunk was — envisioned by writers like William Gibson — into a gritty, street-level dystopian society where pervasive, cutting-edge tech has outrun everyone’s maturity to handle all of the shinys. To some, that’s the only light in the dystopian hell that failed economies and new robber barons have built from the ashes, creating a hopeless place where he who has the gold makes the rules.

It’s a place steeped in the genre’s then-nascent tropes of corporate empires insidiously pulling the strings of sock-puppet politicians, fascist police roaming the streets in the name of order, and city blocks off-limits to everyone thanks to the crazies who live there — unless you’ve got old-school plastic showing through where you had a limb replaced with a first-generation servo. Retro shit like that still earns cred in some quarters.

Roaming “tribes” of nomads migrate along what used to be the interstate highway system between enclaves of order and security in the States, which band together for mutual survival. The combat system’s brutal crunch had also shared this attitude by putting the fear into players that they were as disposable as the cyberwear they bought off the shelf. Lucky headshots could kill careless veterans as easily as newbs, making the experience both exciting and frustrating.

Although video game developer CD Projekt Red is keeping its cards close to its chest when talking mechanics, we do have a better idea about what the world could be like and the first tidbit on what it’s planning to build the game around — the “braindance,” which has become all the rage, allowing people to live other lives via recorded memories. It’s sort of like what Ralph Fiennes sold to his buyers in 1995’s film Strange Days. It’s also an element changed from the original game, which was written in a time when Soviets still barely clung to power and BBSes were all the rage.

Cyberpunk’s first version, released in 1988 inside a big megabox, introduced used a backdrop written from the perspective of the late ’80s, with a timeline starting in 1989 and ending at 2013. It would also be carried on through the second edition, which arrived in 1990, called Cyberpunk 2020 — with a few new additions such as revisions to the combat system and more detail thrown into the backdrop, but nothing so dramatic as what it continued to use as a foundation.

A lot of things have changed since then — the rise of the Internet, wireless connections, and the fall of the Soviet Union, for example, though bumping up certain events and characters to 2077 might still be in the cards. The question is, just how smashed will the world be in CD Projekt Red’s take? Cyberpunk’s original setup had taken any notion of a shiny, happy future through an acid bath before grinding it down even further with sandpaper. 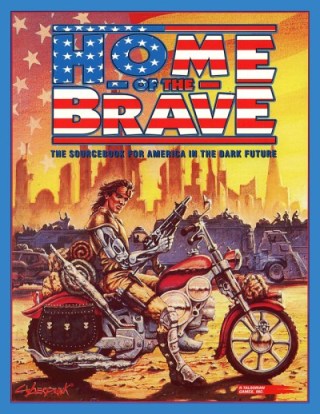 Above: The U.S. ended up as something of a cross between Mad Max, Blade Runner, and Jericho — indivisible, with shareholder meetings for all … who can afford it.

It went something like this: in ’89, the CIA, DEA, NSC, and FBI take over the United States. For the next several years, this “Gang of Four” essentially run the nation, plunging it into war in Central America that lasts for most of the first half of the 90s and aiming to take back control of the Panama Canal with a much larger stick than Teddy Roosevelt had used in 1903. It eventually spreads to neighboring nations, miring U.S. cybersoldiers in the possibility of a new Vietnam. But they win, securing the canal and spending the next several years fending off attempts by Latin America to take it back.

As the years roll on, South Africa collapses, hardliners are purged from the Soviet state (which survives), and CHOOH2 is developed as an alternative biofuel, filling tanks everywhere. The Euromarket is formed, everyone starts using eurodollars (except the U.S., which the Gang of Four isolates from the world), and the DEA unleashes a designer plague — wiping out nearly every cacao and opium plant in the world, decimating the drug trade, and instigating an urban drug war across the Americas. In ’94, the world stock markets crash, dealing a Bernie Madoff to the U.S. economy.

By the time ’96 comes around, one in six Americans are homeless, and roaming packs of so-called Nomads range throughout the shattered nation. Martial law is declared. Also, hundreds of criminal defense attorneys are lynched en masse — just because.

In ’97, the Middle East is reduced to radioactive slag when tensions explode into war between neighboring nations, which puts off any need to detail that region until it’s mentioned again in another sourcebook.

By the end of the century, a moon base is established by Europe, and martial law ends in the U.S., which adopts a draconian set of laws to end the riots and brings order by essentially shooting anyone who disagrees. As the world marches toward 2013, corporations grow so large that they literally declare war against each other and wage ops using mercs and other specialists in surgical strikes. The U.S. plunges into a Second Central American War, which ends in disaster, catalyzing the end to the Gang of Four and ushering in a new administration.